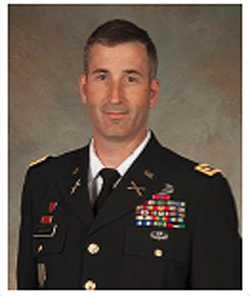 The annual Youngstown State University Veterans and ROTC Alumni Reunion will be Friday and Saturday, Nov. 6 and 7 on campus.

The event features a reception and reunion dinner on Friday, Nov. 6, in the atrium of Williamson Hall. The reception is at 5:30 p.m., followed by dinner at 6:30 p.m. and a program. The keynote speaker is Lt. Col. George L Hammar IV, US Army, a 1995 YSU graduate with bachelor’s degree in History.

A reunion picnic is set for noon Saturday, Nov. 7, at the Veterans Resource Center on Wick Avenue, followed by the YSU vs. Missouri State football game at 2 p.m. in Stambaugh Stadium.

After completing the Command and General Staff Course in 2007 at Fort Leavenworth, Kan., he deployed to Iraq in support of Operation Iraqi Freedom with Military Transition Team 0840 serving as the Operations Officer and the Maneuver Combat Advisor to the 33rd Brigade, 8th Iraqi Army Division in Karbala, Iraq. He served in this capacity until redeploying in June of 2008 and being reassigned from Iraq to Fort Carson, CO. In 2008, he was the Battalion S3 and later the Executive Officer for 2d Battalion, 77th Field Artillery, 4th Brigade, 4th Infantry Division at Fort Carson. He deployed in June of 2009 to Afghanistan in support of Operation Enduring Freedom as the Battalion XO. Following redeployment in June of 2010 he served as the Brigade Deputy Commander for 4th Brigade until 2011.

From 2011 to 2012, Hammar was assigned to Third Army at Shaw AFB with duty in Kuwait as the Executive Officer to the Deputy Commanding General. He then served as the 4th Battlefield Coordination Detachment Operations and Plans Officer, deploying to the Combined Air Operations Center in Al Udeid Air Base, Qatar supporting Air Ground operations in Afghanistan and within the Persian Gulf Region. From January 2013 to January 2015, Hammar commanded the Never Broken Battalion, 3d Battalion, 7th Field Artillery, 3rd Brigade, 25th Infantry Division at Schofield Barracks. Hammar and his soldiers partnered with allied nations Field Artillery Units in New Zealand, South Korea and the Philippines.

He was selected to attend the U.S. Army War College at Carlisle Barracks, Pa., in March 2015.

Hammar is married to the former Joy Hawley of Dodge City, Kan., and they have two children.