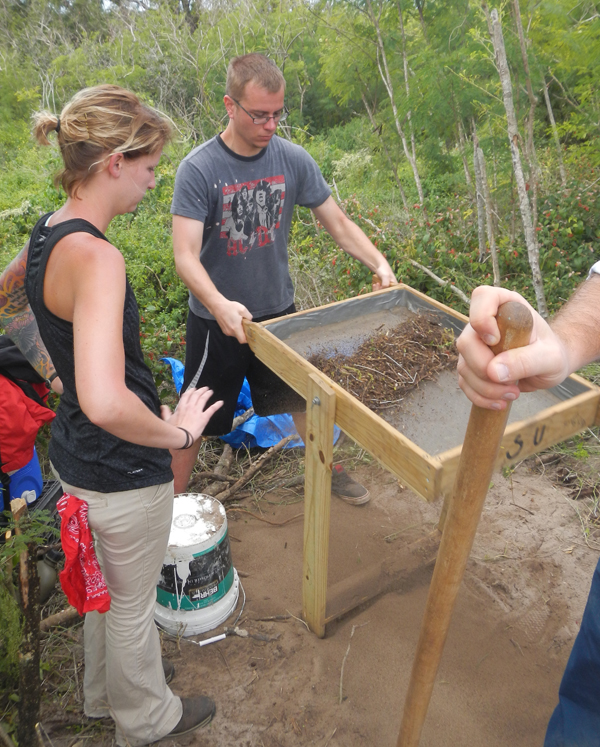 YSU students at the dig site in the Bahamas.

A group of ten Youngstown State University students recently participated in a seven-day excavation on the Fresh Lake Archaeological Site on San Salvador Island in the Bahamas.

The delegation, led by YSU faculty Tom Delvaux of Anthropology and Ron Shaklee of Geography, engaged in the excavation of a prehistoric site at Fresh Lake, once home to the Lucayan Indians, who inhabited the Bahamas in pre-Columbian times.

Shaklee, who has been taking students to San Salvador over spring break since 1988, said the group uncovered cultural items such as pottery and finely made shell beads, and also found food items such as animal and fish bones.

This fragment of a prehistoric flint stone axe was found by students at a dig in the Bahamas.

The most significant discovery was a fragment of a flint stone axe. Shaklee said flint is not a naturally occurring element in the Bahamas. The closest source of flint is in continental areas of North America; therefore, discoveries of flint tools are rare in the Bahamas. This is only the fifth piece of flint recovered by YSU archaeologists since they started excavations on San Salvador in 1996. It is, by far, the largest and most impressive flint piece found by archaeologists working on San Salvador.