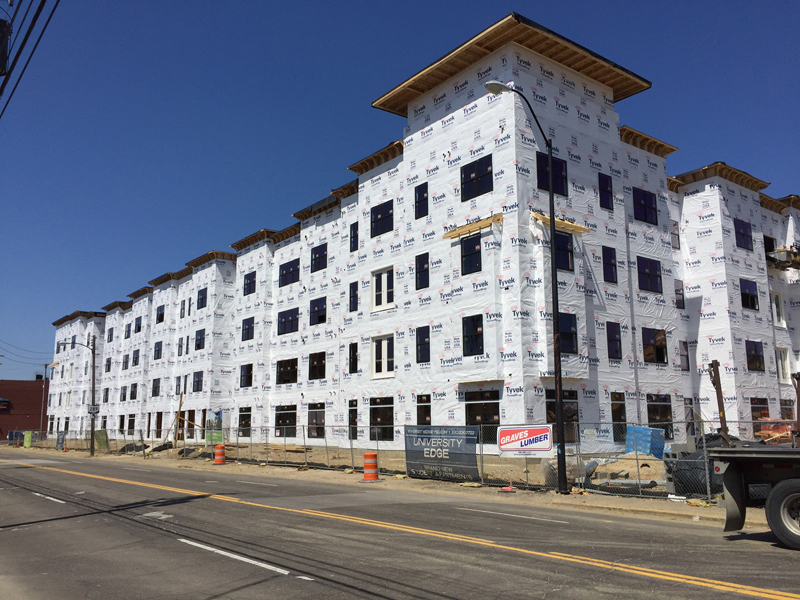 University Edge, privately-developed apartments on the west side of the YSU campus, will be ready for occupancy by the start of this Fall semester. All 162 beds have already been leased.

“We are at an important crossroads in the history of YSU,” Tressel said in a presentation this morning before faculty, staff and students on campus.

“As the higher education landscape continues to evolve, as resources become more scarce, as the demographics of the Mahoning Valley region continue to change, it is imperative that Youngstown State University has in place the campus infrastructure that will allow us to build and sustain growth for the years ahead.”

The presentation, titled “NextYSU: A New Look for a New Era,” outlines campus capital improvement projects that Tressel said are necessary for the university to compete.

“We need to widen our enrollment footprint and our recruiting territory, and to do that, we need more and better student housing,” he said. “With that, we also need amenities to attract students and to serve a larger residential population. And we must also continue to provide the facilities that are needed to ensure that our students succeed and graduate on time.”

Funding for the improvements will come from a variety of sources, including private developers, donors and grants, as well as local, state and federal money. 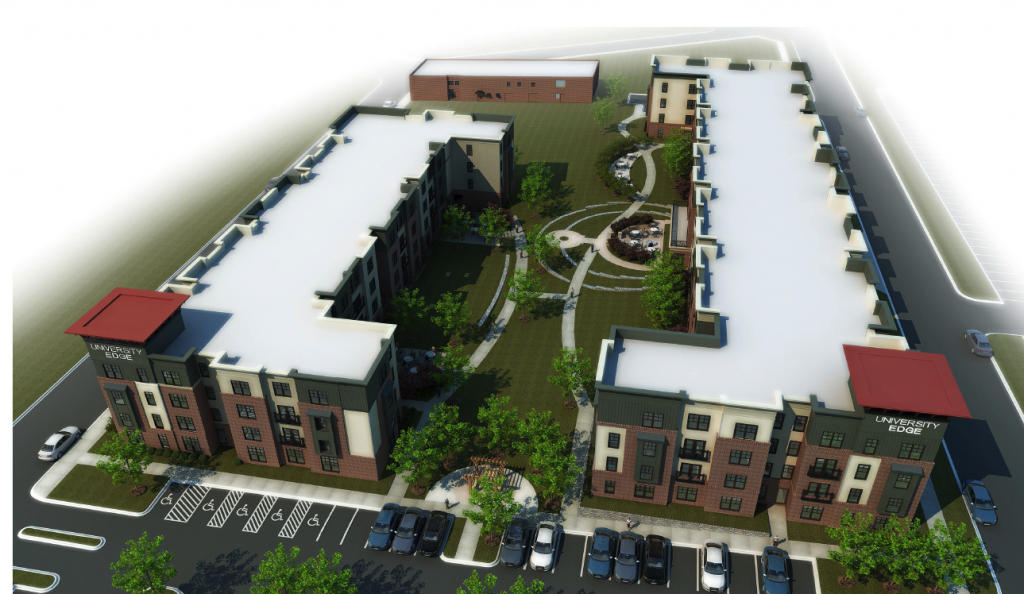 In all, both phases of the privately-developed University Edge project will include 320 beds, as well as plans for retail establishments along Fifth Avenue.

West Side of Campus: YSU is leasing land on Rayen and Lincoln avenues, between Fifth and Belmont, to private developer Hallmark Campus Communities, which is building 382 beds of student apartment housing called University Edge. The first 162-bed phase will be open for the start of Fall semester classes. “We’re happy to announce that all units are already fully leased,” Tressel said. The 220-bed second phase should be ready for occupancy by the start of Fall semester 2017. The second phase also includes the possible construction of retail establishments along Fifth Avenue. “Much work needs to be done, but this is the vision we have in mind,” he said. As a result of the University Edge plan, Smith Hall on Fifth Avenue will be demolished. Also on the West Side of campus, YSU is taking the lead to apply for a federal grant that will create a “Meds to Eds to Tech to Rec” connection along Fifth Avenue and beyond – from Mercy Health at St. Elizabeth to YSU to YBI to Mill Creek Park. “The project would include improved transportation, biking and walking paths, green spaces, underground utilities and other enhancements to accelerate economic development,” Tressel said.

Wick and Lincoln: The city of Youngstown will begin construction late this summer on major improvements to Wick and Lincoln avenues, including new road surfaces, underground utility lines and improved lighting. “The result will be much more attractive – and safer – major roadways through campus,” Tressel said. Also along Wick Avenue this summer, the Wick Parking Deck will close for improvements from May 9 to Aug. 15. In addition, two private apartment projects are planned along Wick Avenue – a 163-bed unit by LRC Realty of Akron between Lincoln and Rayen avenues that would include street-level retail development, and a second set of apartments planned for the southeast corner of Wick and Rayen avenues by NYO Property Group. “Additional modern student housing is critical to our long-term growth,” Tressel said. 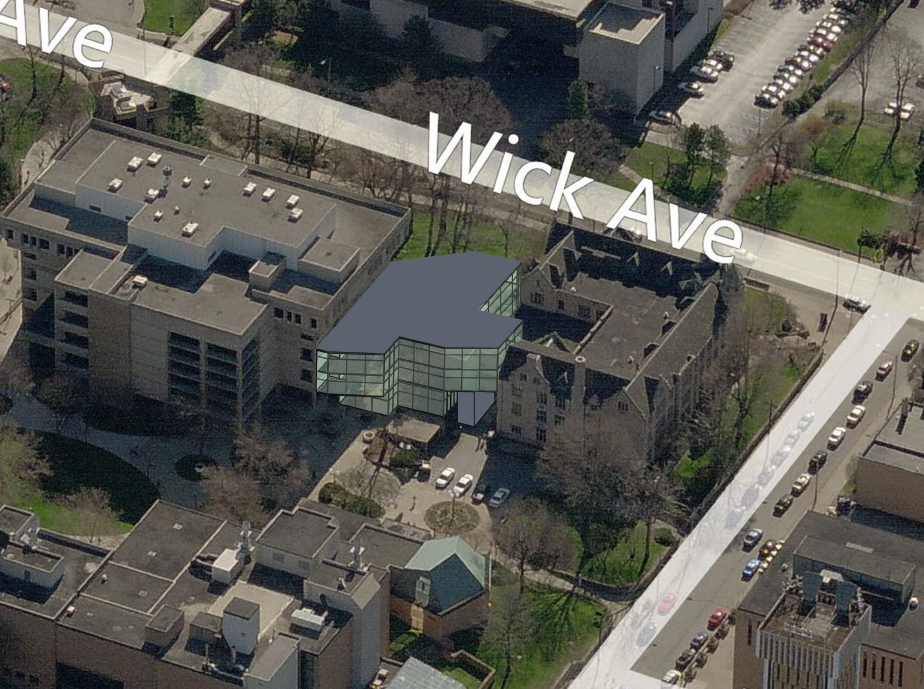 Student Success Center: The university plans to consolidate all services related to student retention and success in a new Student Success Center on the third floor of Jones Hall. Eventually, plans call for the new Student Success Center to expand into Maag Library via a connector linking the two buildings. “The success of our students, matriculating from admission to graduation, is paramount to our future, and we believe this is yet another step to help make that happen,” Tressel said. Also in Jones Hall, the university is establishing a center to house the university’s Division of Multicultural Affairs, which is charged with the day-to-day implementation of diversity and inclusion initiatives.

Bookstore: The university is in the process of negotiating with Barnes and Noble to take over operations of the university bookstore in Kilcawley Center. “We believe this relationship will open the way for tremendous growth and enhancements for students and the community,” Tressel said. He said it’s also possible that Barnes and Noble could consider constructing a standalone bookstore building adjacent to campus sometime in the near future.

Melnick/Fok: Melnick Hall on Wick Avenue has been fully renovated and is now the home of the YSU Foundation and WYSU-FM. “With its prominent position on our main thoroughfare of Wick Avenue, Melnick is a very visible and important campus building,” Tressel said. “That’s why we invested to improve the facility.” Also, the university’s Honors College has recently relocated to Fok Hall, formerly Alumni House, on the corner of Wick and University Plaza. 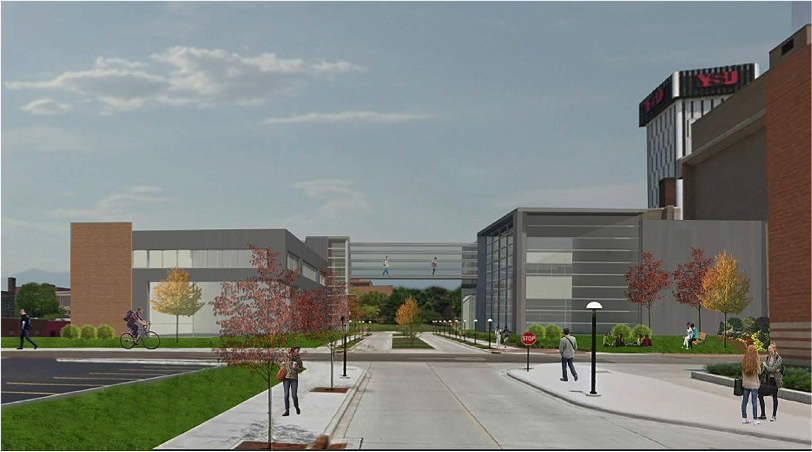 The Mahoning Valley Innovation and Commercialization Center would be an entrepreneurial hub that includes educational and research space, as well as state-of-the-art manufacturing laboratories, connecting creative minds with advanced manufacturing and the regional business community.

In the presentation, Tressel also talked about ongoing discussions to establish the Mahoning Valley Innovation and Commercialization Center on campus. The center would be an entrepreneurial hub that includes educational and research space, as well as state-of-the-art manufacturing laboratories, connecting creative minds with advanced manufacturing and the regional business community. YSU will work collaboratively with Eastern Gateway Community College, the cities of Youngstown and Warren, the Youngstown Business Incubator and local K-12 schools.

“We firmly believe that this new center will provide a unique environment in which innovation and entrepreneurship can thrive,” Tressel said. “It’s an important vision, and many folks are working hard to help that vision to become reality.”

Tressel also unveiled early plans for construction of a Heritage Wall just north of Kilcawley Center to honor recipients of the Heritage Award, the university’s highest honor for former employees.

“We are hopeful that we can move this forward and get it completed so we can properly honor those who have dedicated their careers and their lives to the university,” he said.