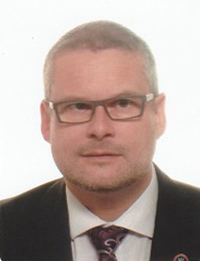 Wim F.A. Steelant, vice president of Research and dean of Science at St. Thomas University in Florida, has been named the new dean of the College of Science, Technology, Engineering and Mathematics at Youngstown State University.

The YSU Board of Trustees approved the appointment at its regular quarterly meeting on Wednesday. Steelant will start the new position on March 16, 2016.

Also at the meeting, the board authorized leasing land for the development of a retail/student apartment complex on Wick Avenue, the university’s main thoroughfare. The lease still requires the approval of the state.

The complex, which will include retail stores and 163 student housing beds, will be built by LRC Realty of Akron and should be open for occupancy starting fall semester 2017.

“Over the course of the next several years, we anticipate increased demand for apartment-style student housing as YSU continues to evolve and grow,” YSU President Jim Tressel said. “We look forward to working with LRC to make this a premier site on an important gateway to the campus.”

It is the second public-private campus development approved by YSU this year. In October, ground was broken for a 162-bed student apartment building along Rayen avenue between Fifth and Belmont avenues. That project, led by Hallmark Campus Communities of Columbus, is expected to be open for the start of fall semester 2016.

Meanwhile, the board approved the hiring of Steelant to lead the STEM College, the university’s second-largest college with nearly 3,200 students.

Steelant replaces Martin Abraham, was named YSU provost in October 2014. Gregg Sturrus, chair of the Department of Physics and Astronomy, has served as interim dean.

“We are excited to bring Dr. Steelant to YSU as our new STEM dean,” Abraham said. “Wim brings a wealth of experience from his time as dean at St. Thomas University, as well as his performance as their vice president for Research. His interdisciplinary background, with degrees in chemistry, biology and chemical engineering, align perfectly with the approach that we have taken with the STEM College. We are looking forward to working with him as we continue to advance the college.”

Steelant earned a bachelor’s degree in Chemistry from St. Lieven College in Belgium in 1992, a master’s of Chemical Engineering from West-Brabant College in The Netherlands in 1993 and a doctorate in Biomedicine/Biochemistry from the University of Amsterdam in The Netherlands in 2000. He did post-doctoral work at the University of Washington in Seattle.

He joined the Chemistry faculty of the New Mexico Institute of Mining and Technology in 2002 and became chair of the department in 2008. Three years later, he was named the founding dean of Science in the School of Science, Technology and Engineering Management at St. Thomas University in Miami Gardens, Fla. In 2014, he was named founding vice president of Research at the school.

Steelant’s resume boasts several academic awards and honors, including the Excellence in Teaching Award from the American Society of Leadership and Success in 2011. He has received research funding for more than 20 projects totaling more than $6 million. He also has 35 peer-reviewed publications. He is fluent in four languages – English, French, Dutch and Flemish.