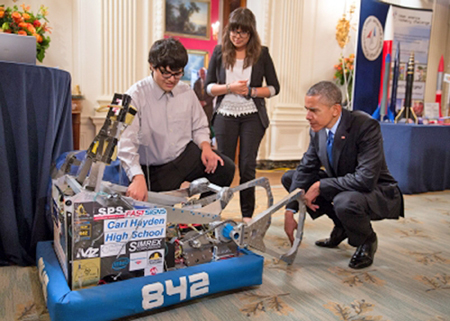 President Obama at the 2015 White House Science Fair, where more than 100 engineering schools, including YSU, committed to “Grand Challenge Engineers.”

Youngstown State University’s Rayen School of Engineering and Engineering Technology is among more than 120 U.S. engineering schools that have committed to educate a new generation of engineers to tackle the most pressing issues facing society in the 21st century.

The 122 schools presented a letter of commitment to President Obama at the White House Science Fair in March pledging to each graduate a minimum of 20 students per year who have been specially prepared to lead the way in solving large-scale problems, with the goal of training more than 20,000 formally recognized “Grand Challenge Engineers” over the next decade.

Gregg Sturrus, interim dean of YSU’s College of Science, Technology, Engineering and Mathematics, is among 122 deans who signed the letter. 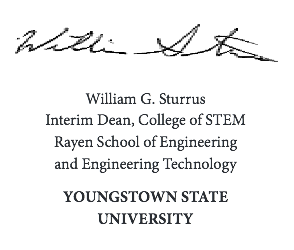 Gregg Sturrus, interim dean of YSU’s STEM College, was among the signatories on the document.

“The tremendous response suggests we’ve tapped into something powerful—the very human element connecting engineering with students who want to make a real difference. I think we’re going to see these Grand Challenge Engineers do just that.”

The “Grand Challenges,” identified through initiatives such as the White House Strategy for American Innovation, the National Academy of Engineering Grand Challenges for Engineering, and the United Nations Millennium Development Goals, include complex yet critical goals such as engineering better medicines, making solar energy cost-competitive with coal, securing cyberspace, and advancing personalized learning tools to deliver better education to more individuals.

More information on the initiative, including a copy of the letter of commitment, is available here.