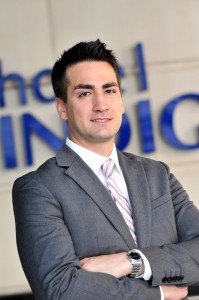 From opposite ends of the country, hotel patrons are getting a healthy dose of Youngstown hospitality from two Youngstown State University alumni.

Steve Bartolin and Bill Mehalco are making strides in hospitality management at two prominent hotels and at two different stages of their careers. While Bartolin is nearing the end of a stellar 40-year career, stepping down as president and chief executive officer of the historic Broadmoor Hotel in Colorado Springs, Mehalco is proving himself as a talented young general manager of the trendy Hotel Indigo in New York City.

For Mehalco, a career in hospitality has been a thing of destiny mixed with a little Disney magic.

“I was 7 when we took a trip to Disney and stayed at the Polynesian Resort,” Mehalco remembers. “I would walk up and down the floors, watch the staff, pay attention to the operations. I was fascinated being in this place that somehow housed all of these people.”

Whether the exotic Polynesian or a standard Best Western, Mehalco has been intrigued by the business since he can remember. So when it came time to start college at YSU, the Hubbard native found his fit in the hospitality management program and never looked back. 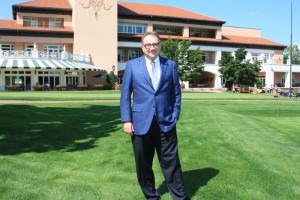 For Bartolin though, also a Hubbard native, running a front desk took a temporary backseat to running the bases during his earlyyears as a top YSU student-athlete.

Pitching for the Penguins on some of the best baseball teams in school history would later earn Bartolin a spot in the YSU Hall of Fame and Penguin of the Year award. But in 1972, it first gave him a ticket to play professional ball for the Detroit Tigers—a career that was cut short by a shoulder injury.

“It was the first time I understood how fleeting life in professional sports could be,” said Bartolin. “I came back to YSU to finish my degree; I realized baseball wasn’t going to be the thing that would support me.”

Graduating with a business degree in 1975, Bartolin was off to West Virginia for a job at the high-profile Greenbrier hotel. The job, however, was less glamorous than the property.

“I was running golf carts around and cleaning clubs,” said Bartolin, laughing. “But starting out in a place of such renown like the Greenbrier was lucky. It was an opportunity for great experience early on.”

The experience served him well over the next 12 years. Bartolin landed director and manager positions at the Opryland Hotel in Nashville and returned to the Greenbrier as general manager before his biggest opportunity surfaced four years later.

It was 1991 when the Opryland bought the Broadmoor Hotel and Bartolin’s old connections gave him the job offer of his lifetime – he would be recruited as the next leader of the famed Broadmoor.

Mehalco started out in an entry level position, as well. His first industry job came when he was a student – a part-time bellman position at the Boardman Holiday Inn.

“It was a sacrifice at the time,” said Mehalco, who had been working in a higher paying job at a Hubbard grocery store. “But I knew I had to put in the time before I was ever going to get a management position in hospitality.”

In just three months, Mehalco moved up to the front desk. And in two years, with a hospitality management degree in hand, Mehalco was hired as the hotel’s front office manager straight out of college.

Success in the City

But Mehalco was set on even bigger career goals. During his years in the Hospitality Management Student Society at YSU, he had traveled to New York for the annual International Hotel and Motel Show and fell in love with the city.

Settling into a tiny apartment in Manhattan with an “eye-opening” high rent and no job, Mehalco started interviewing. His first break came at the Soho House, a 30-room, members-only posh hotel in the meatpacking district of the city that boasted an A-list clientele.

“I was dealing with people like Madonna and Vin Diesel,” Mehalco said. “I was just a kid from Ohio used to working with your everyday person. Switching to something almost make-believe was a hard adjustment.”

But it was the experience that would set him up for his introduction to Hotel Indigo and later, the position he’d come to New York for.

In 2009, the Indigo was a newly built property in the Chelsea district of Manhattan looking for a front office manager. Mehalco fit the bill perfectly. “I would get to hire my own staff and get back to what I was familiar with because it was within the same franchise as the Holiday Inn,” he explained.

A trendy 4-star boutique hotel with a neighborhood story tapping into the floral, art, and fashion influences of the Chelsea district, the Indigo would finally be the hotel Mehalco could settle down with – and move up in.

Today Mehalco is general manager of Hotel Indigo, overseeing the operations of the hotel to ensure the property is at its highest value, profitable, and offering exceptional customer service. Last May he saw the opening of a new independent hotel in Soho and is at the helm of two more property openings planned for the near future. It’s a career that Mehalco had set a personal goal to reach by 30 – and had accomplished.

“There’s a lot of pressure that comes with New York,” he said. “Being a younger GM is also a huge part of the challenge. I’ve always got to be on my game to prove myself and deliver consistent results.”

But when he was offered the job in 1991, he was not as confident that such success would follow.

“The Broadmoor was faded in its glory at that time, and I was almost a little afraid to take the position,” Bartolin admitted. “There was a lot of new competition coming onto the landscape, business was declining with the recession, and the place needed a major capital infusion.

“I set a goal early on that when the time came for me to hand it off, the Broadmoor would be in exceptional condition both fiscally and physically.”

Now as Bartolin passes the torch to a new Broadmoor leader this year, it’s clear that he’s accomplished the task.

The picturesque, 5,000-acre resort is the longest-running, consecutive winner of the Forbes Mobil Five Star Award and recipient of the AAA Five Diamond Award since its inception in 1977. Bartolin has not only kept the standard but enhanced it, leading the company through major renovations; bolstering its world-renowned golf, tennis, spa and dining offerings; and adding new value to its portfolio during his 24 years – which is the longest run of any Broadmoor president over the hotel’s nearly 100-year history.

“It’s a very successful, profitable business, and I’m not ashamed to say that,” said Bartolin.

Fiscal accomplishments aside, Bartolin will also leave a legacy of success with his staff, as he’s known for his personal relationships and hands-off approach in believing in his people.

“I care deeply about this place and our people. It’s nice to plan a succession in full faith that you’ll be leaving a good place in good hands,” said Bartolin, who stepped down as president this March and now serves as chairman of the Broadmoor and its related businesses.

And into the good hands of another Youngstown native the Broadmoor goes – the new manager is Bartolin’s close friend, Jack Damioli, who also attended YSU.

Forty-five years after his YSU baseball career, Bartolin still keeps up with his teammates. A core group meets every fall at the Broadmoor. But they’re not the only familiar Youngstown faces Bartolin has had the opportunity to see in Colorado.

“There’s a hometown connection that exists here,” said Bartolin. “And I have to say that when I hire people from back home, they tend to be the hardest working. Even in my own experience, there were so many people equally smart or smarter than I was, but I would put in that extra effort. That’s Youngstown.”

Mehalco has a soft spot for his hometown, too. When he visits his family in Hubbard, he takes time to speak to YSU hospitality students and offers help whenever he can with a true passion for the program. He wants to see them succeed just like his professors had wanted for him.

“The faculty pushed me to be the president of our hospitality society,” Mehalco remembers, “and that opened my eyes to pushing beyond the envelope, not being ok with the status quo. I wouldn’t have made it in New York without that.”