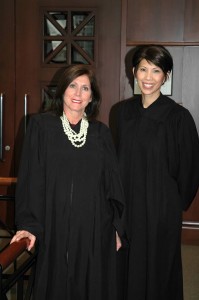 Judges Mary Seminara Schostok and Laura Liu had been friends and colleagues for years, and they knew they had a lot in common. They’re both attorneys, live in the Chicago area and have risen to heights in the legal profession as District Appellate Court Judges in Illinois.

What they didn’t know until recently? They’re both Penguins.

Both women grew up in the Mahoning-Shenango Valley area and have maintained strong connections to their ethnic roots.

Liu, the daughter of retired YSU statistics and economics professor Yih-Wu Liu, was the only Chinese American in her 1984 graduating class at Fitch High School in Austintown, a Youngstown suburb. Now, as the first Chinese American to serve as a District Appellate Court Judge in the state of Illinois, she serves all of Cook County, including the state’s most populous city, Chicago.

Seminara Schostok, who grew up in the close-knit Italian family in New Castle, Pa., that founded the popular Pizza Joe’s restaurant chain, was the first in her family to go to college. As Presiding Judge of the Second District Appellate Court, she hears appeals from the northernmost 13 counties in Illinois.

“We do very similar work, we often have lunch or breakfast together,” said Schostok, describing the alumni colleagues’ relationship. “Being judges is like a fraternity. We’re a unique faction of the legal profession, and we tend to bond.”

Judge Liu was born in the U.S., but her parents were recent immigrants – her mother from Vietnam, her father from China. Both college-educated, they had high academic standards for their daughter, standards that she now finds herself setting for her own school-aged daughter. “Growing up, I wanted to be a doctor, just like every Asian American student in the 1970s,” she joked, and so she enrolled in YSU’s six-year BS-MD program.

In 1987, after completing a BS in combined sciences in just three years, Liu went to Ohio State University to take some graduate classes and met friends in Columbus who worked in the legal field. “I toured a courtroom, and I was hooked,” she recalls. Soon after, she was admitted to the University of Cincinnati College of Law on a scholarshipand gained experience through summer clerkships in Cincinnati and Chicago. The latter was life changing. “I fell instantly in love with Chicago. I knew this was where I wanted to be.”

Liu spent the first 19 years of her career as a trial attorney, often defending healthcare providers in medical malpractice cases and representing clients in other healthcare transactions and litigation. She’s especially proud of a case she defended with her attorney husband, her fiancé at the time, who served lead counsel. Some of her most memorable and challenging cases were pro bono, for people who couldn’t afford a lawyer. “I think pro bono work should be mandatory for attorneys to retain licensure,” she said. “It’s a vital part of what it means to provide legal services.”

In 2010, the Illinois Supreme Court appointed Liu to fill a Circuit Court vacancy, making her the first Chinese American female judge in Illinois. The following year she decided to seek reelection, but her first political campaign came at a time of personal crisis – she was diagnosed with breast cancer. “It was a punishing schedule. I had 11 fundraisers scheduled, five in that month alone, and I needed to start treatment,” she said. “Luckily and fortunately, I have an incredibly supportive and thoughtful husband, I had an amazing campaign team and colleagues that helped me.”

Liu won a six-year term and continued on the Circuit Court bench until 2014 when the state’s high court appointed her again, this time to a vacancy on the First District Appellate Court. “This is a dream job,” she said. “It’s so satisfying because everyday I have new legal questions to research. In many ways, it inspires the same intellectual curiosity as when I was a law student.”

Now, as a cancer survivor, Liu has been active since 2012 with the Lynn Sage Cancer Research Foundation, a leading breast cancer research and education charity.

As a Chinese American, she’s involved in several Asian-American legal organizations and is working toward better language access, making the court system and court buildings more user friendly for people for whom English is not a first language. “I view being the ‘first’ Chinese-American in my position as both an honor and a responsibility,” she said. “It invites scrutiny. It requires me to focus on doing a good job.”

Judge Seminara Schostok grew up with many of the same old-country house rules as her colleague. One of six children, her father came to Youngstown at 16 to work in the steel mills; her mother, also Italian, was born in Hillsville, Pa. “We were 100 percent Calabrese,” she said, laughing. “My father never conformed to the American ways. We were not allowed to leave home until we got married. Dad would only permit me to go to YSU because it was within driving distance.”

She majored in business at first, then education, earning an AAB in 1979 and a BSEd in 1982. “YSU made it easy to be a commuter, “ she said. “I had a lot of friends, I had a sense of college, even though I was coming back and forth.” But working part-time at a law office revived her interest in studying law, and she moved to Columbus to attend Capital University Law School.

Seminara Schostok met her husband, Michael, in law school. He had grown up in the Chicago area and wanted to return, so they settled there after graduation and took jobs as Lake County prosecutors about an hour outside of Chicago. The husband and wife team worked together at first, then he left for private practice while she continued for a decade, successfully trying murder, rape, arson, child abuse and white collar crime cases and advancing to the position of Chief of Special Investigations.

“Trial work is the most exciting work a lawyer can do. You get a rush,” she said describing her specialties as a prosecutor of child abuse/assault and arson cases. “In those types of cases, especially, you feel like you’re doing God’s work. You’re wearing the white hat.”

In 1998, Seminara Schostok took her first seat on the bench when she was appointed a Lake County Associate Judge. Two years later the Illinois Supreme Court named her a Circuit Court Judge, she won an election to retain the position and served on the trial court bench until 2008. That year, the high court elevated her to the Appellate Court, and she ran a successful 13-county campaign to retain her seat two years later.

Seminara Schostok calls the appellate judge seat “a lonely job” because it requires many hours of study, reading court records and reviewing the law. The judges are always busy, but they hear oral arguments only a couple times a month. “It’s very academic, but after all these years I could never go back,” she said. “I truly love what I do.”

In 2011, Seminara Schostok, her husband and their three adult children received devastating news – he was diagnosed with a deadly glioblastoma brain tumor. He survived for 15 months. “Michael was one of the best trial attorneys in the state of Illinois, yet very humble and a very compassionate man,” she recalled. “Hospital visits during his illness often upset him. He would comment, ‘The poor people have it worse than me, Mary,’ because he realized that some were coping with financial hardships, in addition to their medical struggles.” Finances were not a struggle for the Schostoks.

In his memory, she created the Michael Matters Foundation to help with the financial hardships that families of brain tumor victims face. The foundation awards grants to help with incidental expenses, such as day care and parking, wheel chair ramps and bus fare. Support for the foundation has grown “exponentially,” she said. “It’s a little something that can help them worry a little less and concentrate more on getting better. I know that’s he would want us to do.”

Seminara Schostok has also found ways to reconnect to her Italian heritage in Chicagoland. “It was so hard to leave my big Italian family, so I sought out Italians,” she said. She’s the founder and first president of the Justinian Society of Lake County, a bar association for Italian attorneys.

Tagged with
Alumni Success, Features, Uncategorized
May 4, 2015
A+ A-
Email Print