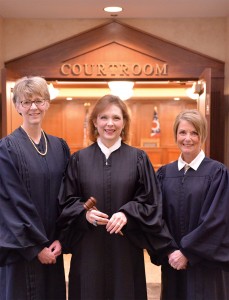 When Judge Cheryl Waite started out as a young lawyer in the mid-1980s, female attorneys were accustomed to being called “honey” and “dear” in the courtroom. Women in law school weren’t really expected to finish.

“We were still unusual,” she recalled. “In court, people assumed I was a secretary, or someone’s wife. There were very few women practicing law at the time in Youngstown.”

Three decades later, so much has changed. Now Waite sits on Ohio’s Seventh District Court of Appeals bench, one of three women on the four-judge panel – and all four are proud alumni of Youngstown State University.

Waite made history as the first woman and the youngest to take the bench in 1996, Judge Mary DeGenaro joined her there in 2001, and Judge Carol Ann Robb made history again this year when she took office in February. Judge Gene Donofrio, on the bench since 1993, serves as presiding judge.

“What’s remarkable is that, in 2015, it’s still remarkable to have three women on the bench, but it is worth celebrating because it shows how far we’ve come,” Waite said. “Maybe now we can say, we’re all just people. We’re all just professionals. We’re putting ourselves out there, not to say, ‘I’m the best woman for the job,’ but that I’m the best person for the job.”

Judges on Ohio’s Court of Appeals, just one step away from the Ohio Supreme Court, consider legal appeals from the common pleas courts, municipal courts, county courts and others. They are elected to six-year terms, and the Seventh District judges serve eight counties: Mahoning, Columbiana, Jefferson, Carroll, Belmont, Harrison, Monroe and Noble.

For Judge Waite, the path to law school started in 1982 with YSU degree in English literature. “So many of the English Department faculty mentored and encouraged me,” she said. “I’m especially grateful to Dr. Barbara Brothers. She’s the one who made me wake up and ask myself: ‘What do I want to do when I grow up?’”

Waite was living in Boardman, a young mother with a 4-year-old and an infant, when the Ohio legislature added a fourth judge seat to the Seventh District Court of Appeals in 1995. “My husband told me it was my dream job and I’d never forgive myself if I didn’t try,” she said.

She spent the next year campaigning hard, attending corn roasts and tractor pulls, fairs and festivals, often with her children in tow. Waite won her first election – a tough contest against a well-established local judge – and was unopposed in three subsequent elections

But the Appeals Court in Ohio was a man’s world at first – at the time there were only six women on appeals court benches statewide. “I was one woman in a sea of men, and it was tough sledding, I’m not going to lie,” she said. “A lot of the judges were not willing to accept a relatively young woman, but from the beginning there were always some mentors who treated me with a great deal of respect.”

In just a few years, by 2000, women began making inroads, winning more judgeships, and the numbers had begun to shift. “Now, occasionally, we do have a line at the ladies room,” she quipped.

Though she hasn’t had to campaign as vigorously in her recent, unopposed races, Waite enjoys speaking and educating the public about the work the courts do. “I like to tout the court of appeals, and the trial courts too, “ she said. “In the appeals court , we get to be Monday morning quarterbacks. We have the luxury of time, to research and go through the transcripts, and I’m constantly amazed at how often the trial courts get things right.”

For Judge Mary DeGenaro, unseating an incumbent three-term Democratic judge seemed to be more noteworthy than becoming the second woman on the bench when she first won election to the Appeals Court in 2000. “I was the first lawyer to unseat an elected incumbent judge since 1959 and the first Republican to serve on this court since 1974,” she said. “Quite frankly, my coming on the court was more of a big deal because of my party affiliation than my gender.”

A Cuyahoga County native whose family moved to Canfield when she was in high school, DeGenaro said she initially majored in accounting when she enrolled at YSU. She graduated in 1983 with a double major in economics and combined business, and credits a YSU business law course for rekindling her interest in law school.

She completed her law degree at Cleveland-Marshall College of Law and married her husband, Stephen A. DeGenaro, a home healthcare consultant and also a YSU alumnus. They eventually settled in Poland and her next 14 years working in a private law practice included handling the appellate practice for her firm – valuable experience for her future on the Appeals Court – and rare opportunities for a private practitioner to brief two cases before the Ohio Supreme Court, arguing one.

Reelected to her third, six-year term on the Appellate bench in 2012, DeGenaro has decided to pursue nomination to Ohio’s Supreme Court in 2016. “I’m in my 15th year as an appellate judge, my reasoning and writing has matured to the point that I feel I am ready to serve on Ohio’s highest court,” she said.

She’s begun a statewide campaign for one of two Supreme Court open seats that will be vacant by 2017 and plans to visit every one of Ohio’s 88 counties. “I’ve run in eight counties in three contested elections. What’s 80 more?,” she joked. “Because of my judicial campaign experience, I’m ready for the challenge.”

It helps that DeGenaro enjoys campaigning. “I love driving around the state, meeting people. I think there’s an opportunity to educate the public on what we do, and it’s a way to be accountable to the public that elects us.”

Judge Carol Ann Robb’s arrival on the Appeals Court bench earlier this year was celebrated by local news media as history making, but she was more proud of what it meant to her home county. “I’m very proud of being a woman who’s serving in this capacity,” she said, “but it’s even more meaningful to me that I’m the first Columbiana County judge to serve this court since 1917.”

A lifelong resident of New Waterford, Robb worked full-time while pursuing a business degree at YSU and graduated in 1977, the first in her family to complete college. She landed a job as an office manager for a construction company and began working on an MBA at the University of Akron, but a friend persuaded her go to law school instead.

Robb switched to the UA School of Law, carpooled to evening classes with other Youngstown-area law students, completed her law degree and went to work with a private law firm in Youngstown. There, she practiced law for five years before starting her own private law practice in Columbiana County and partnered with her husband Ken, also a YSU alum, to start a multi-faceted family business, C&K Petroleum.

In 2001 she accepted a position as magistrate for the Common Pleas Court in Columbiana County, was appointed to an unexpired term as County Municipal Court Judge four years later, and then ran two successful re-election campaigns. “I’ve run both ways, opposed and unopposed,” she said, laughing. “I like unopposed better.”

As municipal court judge, one of Robb’s proudest achievements was creating a mental health court program designed to reduce recidivism that became the first program of its kind certified by the Ohio Supreme Court. She has served on an advisory committee and a Specialty Docket Commission for the high court that established standards for mental health courts statewide, and the program she founded is now being used as a model for other courts across Ohio.

When a longtime Seventh District appellate judge announced plans to retire in 2013, Robb decided to run for the position – she was unopposed as a Republican in the primary, but defeated her Democratic opponent in November. She took office in February. “I’m thrilled to serve with the other judges. They’ve all been extremely gracious,” she said. “I think we all aspire to the same thing. We just want to be recognized as individuals. I want people to say, there is an excellent attorney, an excellent judge, who just happens to be a woman.”

Tagged with
Alumni Success, Success Stories, Uncategorized
May 4, 2015
A+ A-
Email Print