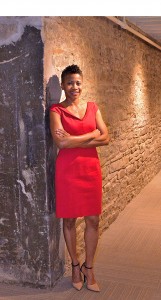 Jennifer Roller can pinpoint moments that have served as guideposts in her professional life. And they all involve people.From a YSU professor who invited her to sit on a national conference panel to the former supervisor who encouraged her to reframe her work strengths, Roller remembers people who have flipped a switch to help her advance her career.

“Even with this position,” said Roller, president of The Raymond John Wean Foundation in Warren, Ohio, “it wasn’t something I planned to pursue.” It took others in the organization who recognized Roller’s potential before she did.

“Having someone open you up to an opportunity like that – it’s the kind of force I try so hard to be for others now.”

Roller’s commitment has been the driving force behind her success in many previous positions, but especially in the last year and a half as the leader of a $70 million foundation.

Graduating with a bachelor’s degree in Psychology and a master’s in Education, both from YSU, Roller started her career as a case manager in Youngstown. The first role she felt at home with, however, was back at the university for 10 years as director of the Upward Bound and SCOPE college prep programs.

“I loved working at YSU because it was such a good fit for me,” said Roller. “I realize now that my personal purpose has always been to serve as a resource to others, so it was very much aligned with Upward Bound’s mission to open the door to higher education for high school students.”

Finding an authentic fit with an organization has always been central for Roller, and her next career stop was no exception. In 2007 she became program officer at the Wean Foundation, moving up to vice president in 2013 and president a year later. She is now charged with upholding the Foundation’s vision of empowered residents creating a healthy, vibrant, equitable and economically stable Mahoning Valley.

A staple to the Warren and Youngstown communities for nearly 70 years, the Wean Foundation maintains a strong focus on community revitalization and economic and educational opportunity in the Valley. With a total of $2.2 million in grants distributed each year to local organizations, Roller says the goal is to not only fund projects but to also be a resource to communities as they build their infrastructure and leadership capacities.

“The Wean Foundation shows up in the Valley in an impactful way,” she said. “We are very deliberate and intentional about the work we do.”

One initiative that’s been Roller’s baby since 2008 is the Neighborhood SUCCESS and Leadership program. The effort trains resident leaders from Warren and Youngstown in aspects of community building with the goal of getting them more involved in local decision-making processes. With more than $1 million put on the ground in seven short years for projects like block watch clean ups, after school programs and enrichment activities, Roller says residents now have the opportunity to contribute more directly to their communities and play at the same table with local leadership.

Along with strengthening strategic partnerships with Mahoning Valley Organizing Collaborative, Youngstown Neighborhood Development Corp. and Trumbull Neighborhood Partnership, Roller has made sure the Foundation remains rooted to its mission.

“I want to stay thoughtful about where I am in the present,” she said. “I’m part of a truly amazing team and try to be the best resource I can be for people. I’m energized by that type of work here.”

Roller lives in Liberty Township with her husband, Jason, and their son, Trey, who starts his first year at Thiel College this fall.