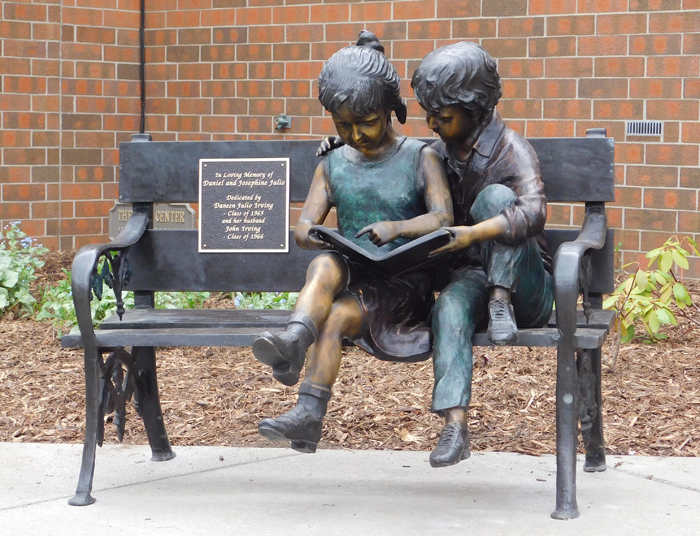 “Two Children on a Bench” is one of three sculptures donated by YSU alum John Irving and installed on campus this spring. This piece is located near Fedor Hall.

Three bronze sculptures donated by John Irving, a Youngstown native and graduate of Youngstown State University, were dedicated today at a ceremony on the YSU campus.

“We thank John for this special gift that enhances the beauty and culture of our campus,” YSU President Jim Tressel said. “These statues will serve as a lasting legacy of the love that John and his late wife, Daneen, have for Youngstown and YSU.”

The three sculptures were installed earlier this spring:

* “Girl on Bench Reading with Cat,” located near Tod Hall, dedicated by John Irving in loving memory of his wife, Daneen Julio Irving.

* “Break Time” (Two Children on a Log), located in McKay Court near the Beeghly College of Education, dedicated by John and Daneen Irving in loving memory of Edward and Ruth Irving, John’s parents.

* “Two children on a Bench,” located near Fedor Hall and the Rich Center for Autism, dedicated by Daneen and John Irving in loving memory of Daniel and Josephine Julio, Daneen’s parents. 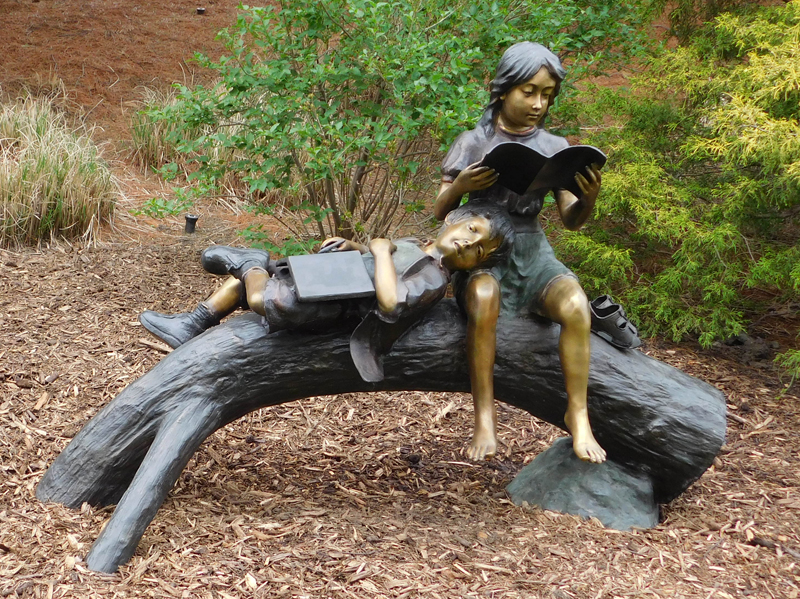 “Break Time” (Two Children on a Log), located in McKay Court near the Beeghly College of Education.

The statues were produced by the Large Art Company. Two of the works were selected on the advice of Greg Moring, chair of the YSU Art department, and Irving selected the third.

“We hope that YSU students, employees and visitors will enjoy these statues for years to come,” Irving said. “Youngstown and YSU hold a special place in my heart; on behalf of my late wife, I am honored to make this contribution to the campus.”

Irving, a graduate of Woodrow Wilson High School in Youngstown, earned a bachelor’s degree from YSU in 1966. Upon graduation, he received a Youngstown Community Chest scholarship and went on to earn a master’s degree in Social Work from the University of Hawaii in 1968.

He was executive director of the North Area Mental Health Services in Columbus, Ohio, for six years and concurrently earned a master’s degree in Public Administration from Ohio State University in 1978. He then moved to Atlanta to work for Nationwide Insurance as a sales executive and consultant for 23 years, retiring in 2004.

Irving has volunteered for Meals on Wheels for the past nine years and has also done volunteer work for the Roswell public schools and the Center for Family Resources. He is a member of the Black Tie Social Club and Widowers Helping Others organizations. He is a supporter of the Crabapple Knoll Stray Pet Program and attends the Alpharetta Presbyterian Church. 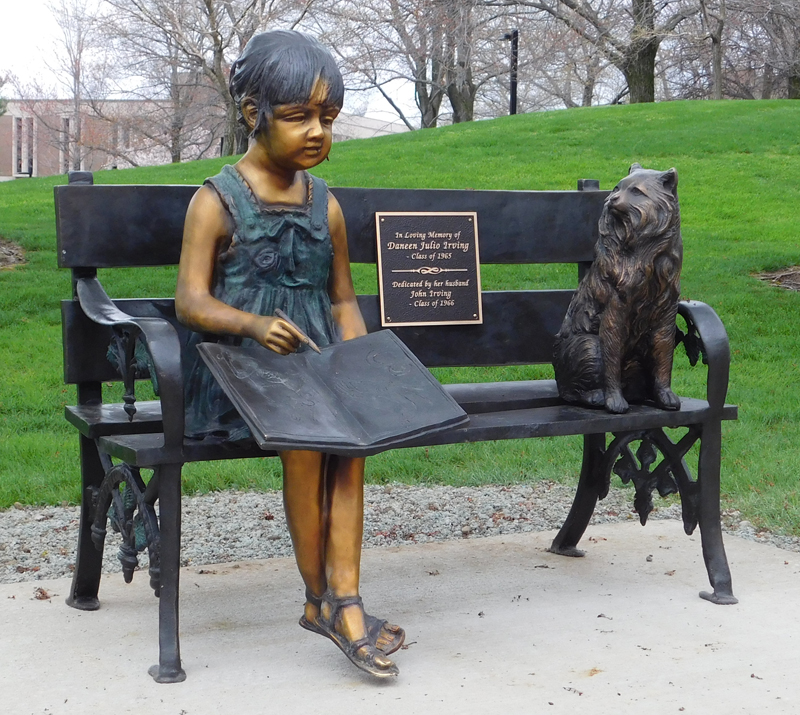 “Girl on Bench Reading with Cat,” located near Tod Hall.

John and Daneen Julio Irving were married for 43 years until her death in 2013. They had no children. Their passions included YSU and OSU football, travel, dancing, animals and spending time together.

Mrs. Irving attended St. Columba grade school, graduated from Ursuline High School in Youngstown in 1961 and earned a bachelor’s degree in English Literature from YSU in 1965. At YSU, she was the first freshman ever elected to student council, was co-host of the YSU radio show, was a writer on the Jambar newspaper, and was co-founder and chair of Spring Weekend. She also was a member of the Tri Sigma Sorority. Upon graduation, she was awarded the YU pin as the student with the top combination of academic and extra-curricular achievements in her class.

Mrs. Irving earned a master’s degree in Social Work from Ohio State University. While living in Columbus, she was an associate director of the Columbus Area Community Mental Health Center, and in Atlanta she was the relocation director for Caldwell Banker Real Estate. She was a lover and benefactor of animals, supporting a number of animal organizations including Alley Cat Alliance, Angels for Animals and the Crabapple Knoll Stray Animal Program.