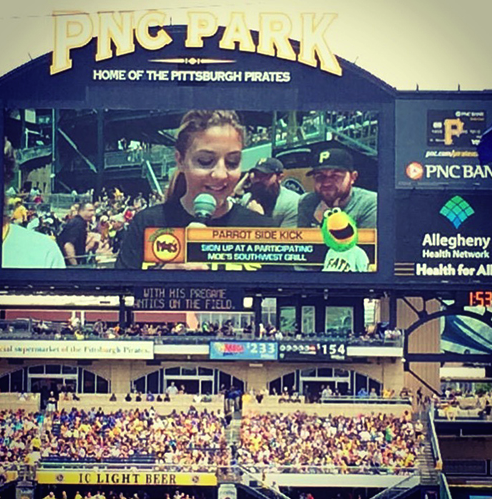 Lauren Minenok of New Castle, Pa., a senior Telecommunications major at Youngstown State University, wanted a public relations internship working for the Pittsburgh Pirates – but the staff there had a different idea.

Minenok instead spent this past summer as one of the Pirates’ on-screen entertainers at PNC Park – her performances broadcast live on the jumbo left field scoreboard during pregame and between innings.

“My favorite part was the Pierogi Race,” Minenok said about the PNC Park tradition where six contestants dressed in pierogi costumes race around the field after the fifth inning. “Everyone is so excited for it and it’s such a big event.”

Minenok, who this semester is completing an internship in the YSU Athletics department, said she believes she was chosen for the position at PNC Park because the Pirates staff remembered her from when she sang the national anthem at the ballpark when she was six years old.

As on-screen entertainer, Minenok learned scripts, then visited with the audience to get people in a good mood to be filmed for video segments. She also had the audience participate in various games, interviews and other activities. Minenok said she didn’t have set hours, but on game days she was emailed the script and rehearsed at home, drove to the stadium and prepared before pregame. The producer was on the field with her as she read through dozens of scripted segments.

Meanwhile, Minenok said she has a recording contract with a company in Pittsburgh and is recording her own music. She is planning a broadcasting career as a sports or entertainment reporter.