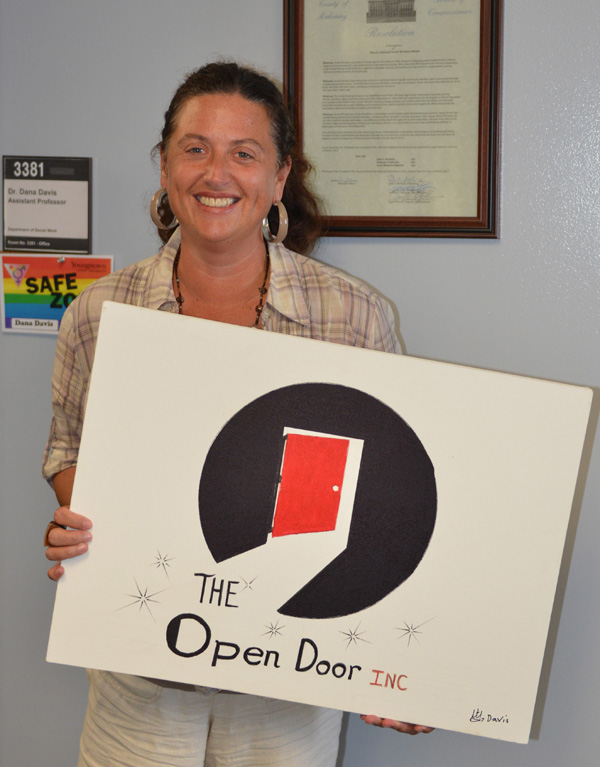 Dana Davis, just beginning her second year as an assistant professor of Social Work at YSU, is also president and founder of The Open Door, a nonprofit that operates a 15-unit apartment building in Pittsburgh. Run mostly by volunteers, the organization rents exclusively to people living with HIV who also have criminal background issues, untreated serious mental illness and substance use.

Additionally, The Open Door provides representative payee services to assist people in its target population who need help managing their Social Security Disability and Supplemental Security Income. In all, The Open Door now serves 49 clients living with HIV and has assisted more than 100 since its founding.

“We see each client as a person first,” she said. “We treat them with respect, and it gives them power to make positive changes in their lives.”

Now, with funding it received from AIDS United, The Open Door has provided a sub-grant to Ursuline Services Comprehensive Care Clinic in Youngstown, along with another center in Philadelphia, to begin replicating its housing model. The Youngstown Clinic is making plans to offer rentable housing for people living with HIV.

“These are people who are chronically homeless and forgotten,” Davis said. “We wanted to see if, just by providing them with an opportunity to rent an apartment and help with their bills, we could make a difference in their health and their lives.”

In fact, Davis said, a 30-month research study by The Open Door staff demonstrated that its services produced significant improvements in clients’ overall health, they were more consistent about taking medication and more likely to seek medical care. About 66 percent of those receiving payee services said it helped them to control drug or alcohol use, she said, even though that was not a requirement or expectation of participation in the program.

What is considered both innovative and controversial about The Open Door’s philosophy, said Davis, is that the program doesn’t ask or require clients to seek help for their mental illness or their substance use. Davis has been invited to speak about The Open Door’s philosophy, programs and research this fall at the National Association for Social Workers Conference and the United States Conference on AIDS.