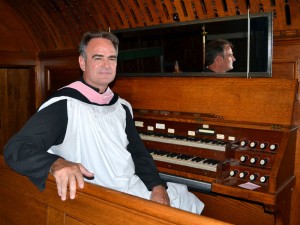 Todd Beckham of Falmouth, Mass., ’81 BM, was one of 35 singers nationwide chosen to be part of the Royal School of Church Music in America’s National Choir.

Beckham, who is employed as music director and organist at St. Barnabas Episcopal Church in Falmouth, was one of three countertenors in the choir.The group rehearsed in Durham, N.C., then met again in London to perform daily Evensong services at Westminster Abbey from December 29, 2014 through January 2.

Beckham also directs the Meridian Singers of Massachusetts Institute of Technology and tutors for harpsichord, early music and vocal ensembles in the chamber music program at Harvard University. He holds Master’s Degree in Music from Converse College.

Tagged with
Alumni Success, Uncategorized
April 17, 2015
A+ A-
Email Print