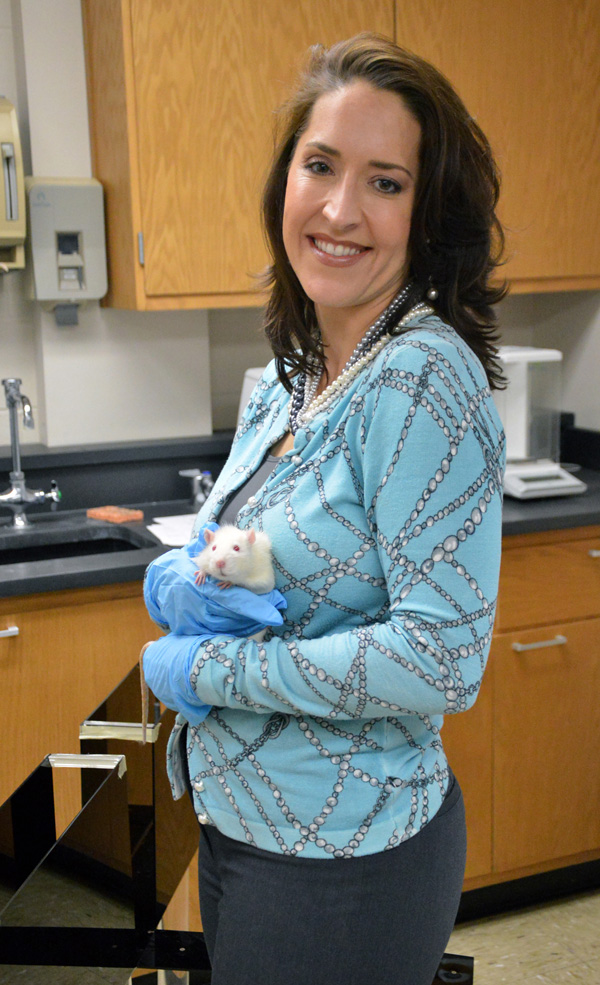 Anyone who’s been hurt in a traffic accident and transported by ambulance on a rigid backboard can recall the experience as uncomfortable, even miserable.

Jill Tall’s research may prove that, for some, it could also be harmful.

Tall, associate professor of Biology and YSU’s coordinator of the Certificate in Anatomy and Physiology program, is studying how ambulance backboards affect breathing and pain levels in patients.

What she’s learned so far seems to show that, if the patient has a pre-existing respiratory condition, the boards can negatively affect breathing.

Emergency medical professionals at St. Joseph Health Center in Warren suggested the research to Tall, a scientist focused on the study of pain. “People in the emergency medical group told me they think the backboard is overused and archaic,” she said. “It’s based on the ‘better safe than sorry’ thinking of the 60s and 70s, and that protocol may be changing.”

Previously, Tall’s research was purely preclinical – involving rats, mice and cells in a petri dish. This year, after returning from two consecutive maternity leaves and with three children under five at home, she made the switch to clinical research, working with human volunteers.

“I’ve always conducted research that ultimately helps to improve human health, but this new chapter is allowing me to have a more direct and positive impact on people,” she said.

Tall started the backboard study in the emergency department at St. Joe’s, interviewing 25 patient volunteers who arrived at the hospital by ambulance, strapped to a board. Now she’s recruiting healthy YSU student volunteers to be placed on backboards while investigators measure their respiration rate, carbon dioxide levels and other data. Undergraduate students in the BS/MD pre-med program are working with her as co-investigators, she said, gaining valuable research experience.

The study, funded through a $3,000 grant from the Ohio University Heritage College of Osteopathic Medicine, is one of several projects the professor is involved in. She’s also working with Mercy Health on a patient satisfaction study in its three Mahoning Valley hospital emergency departments, and she regularly instructs Mercy Health medical residents on how to conduct research projects.

A Cortland resident, Tall joined the YSU faculty in 2003 after completing a post-doctoral fellowship at Johns Hopkins University, a PhD in Biomedical Science from Kent State University in cooperation with Northeast Ohio Medical University, and a bachelor’s degree in Zoology from Arizona State University.