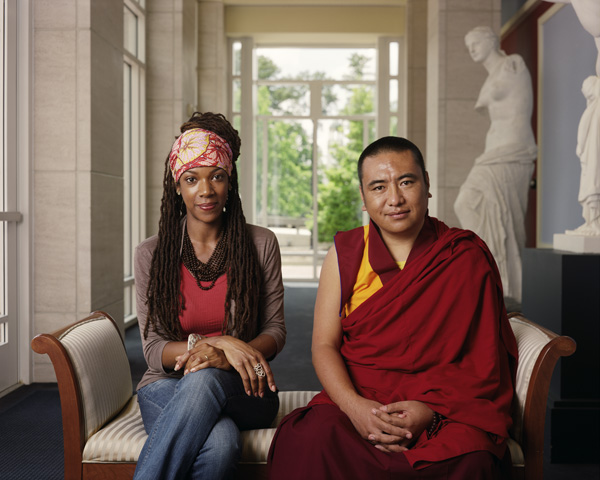 This photo of Kali-Ahset Amen, a mother and doctoral candidate at Emory University, and Buddhist monk Geshe Ngawang Phende is among those featured in a new exhibit at the McDonough Museum of Art on the YSU campus.

An exhibit by acclaimed photographer Dawoud Bey opens Friday, Jan. 22 in the McDonough Museum of Art on the campus of Youngstown State University.

The show, titled “Picturing People,” runs through March 7. It is free and open to the public.

In addition, Bey will speak at the museum 5:30 p.m. Thursday, Feb. 12, as part of YSU’s African American History Month celebration.

Bey first gained notoriety as a photographer for his acclaimed series “Harlem U.S.A.”, exhibited at The Studio Museum in Harlem in 1979. Since 2010, Bey has been producing a series of photographs featuring two individuals that, although members of the same socio-geographic community, are strangers to one another. Casually positioned side-by-side, between them are differences in age, race, comportment, gender etc. calling into question the terms on which community is imagined in relation to self and vice versa.

Museum hours are 11 a.m. to 4 p.m. Tuesdays through Saturdays.