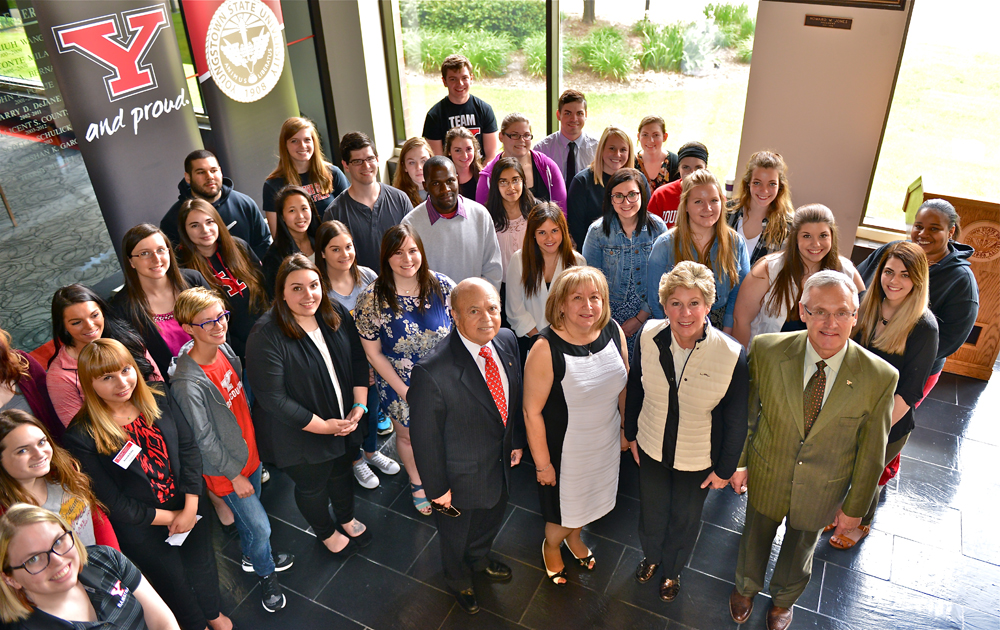 Shorty and Elba Navarro, center front, stand with President Jim and Ellen Tressel after announcing a $1 million gift to the university, part of which will go to expand campus employment opportunities for students. They are surrounded by several YSU student employees.

Shorty Navarro, who moved to Youngstown from Puerto Rico as a teenager and now owns a successful car dealership in Salem, Ohio, and his wife, Elba Lillian, are donating $1 million to Youngstown State University.

The gift will be used to fund a scholarship endowment and also will go toward a new endowment to increase the number of campus jobs for students.

“On behalf of everyone at YSU, we thank the Navarros for their continued generosity and support of Youngstown State University and our students,” President Jim Tressel said. “Whenever the university is in need, Shorty and Elba are there to help. They are true friends of YSU, and we are fortunate to have their support.”

Mr. Navarro said he and his wife are proud to be able to donate to YSU.

“YSU is a pillar of the community; as YSU goes, so goes the Mahoning Valley,” Mr. Navarro said. “We are excited about President Tressel’s leadership and the future of the university, and we look forward to even bigger and better things to come.”

Flor “Shorty” Navarro, the oldest of 11 children, was 14 years old when in 1951 he immigrated to the United States from Puerto Rico. Upon arriving, he walked down to a gas station on Wilson Avenue and asked the owner for a job. Accepting him as a new employee, the owner wrote “Shorty” on his work uniform, the nickname has stuck ever since.

As a student at East High School at age 16, with his father as a co-signer, Mr. Navarro purchased the gas station from his boss. After attending East High School, he joined the Marine Corps. Upon his return, he began selling used cars, a job he held for 22 years until 1982, when he opened his own new car Lincoln Mercury dealership on Wick Avenue in Youngstown. Later he expanded his business to 11 franchises. In 2012, Shorty sold most of the dealerships, keeping his Stadium GM Superstore in Salem, Ohio that employs more than 65 people.

Elba Lillian Navarro graduated from South High School in Youngstown and earned bachelor’s and master’s degrees in Spanish, Reading and Education from YSU. She is retired from the Youngstown City Schools, having taught at both Roosevelt Elementary and Chaney High School.

The Navarros, married for 50 years, are among the leading philanthropists in the Mahoning Valley. In 2010, Shorty was named the Outstanding Philanthropist in the Mahoning Valley by the Association of Fundraising Professionals. That same year, he was named the Veteran of the Year by the United Veterans Council of Greater Youngstown. Shorty was also in the Boardman Rotary for over 10 years and was awarded the Paul Harris Fellow award for outstanding Rotarian.

In 2001, the couple established a $100,000 scholarship fund to benefit Hispanic students attending YSU. That same year, Mr. Navarro also gifted a new facility to the Organizacion Civica Cultural Hispana Americana (OCCHA). In addition, he contributed $100,000 toward the construction of the new Veterans Resource Center at YSU. Shorty and Elba are members of the YSU President’s Council.

The Navarros are involved in OCCHA and are members of Christ the Good Shepherd (Santa Rosa de Lima) Church in Campbell. Mr. Navarro has served as a board member of the Red Cross and Hospice of the Valley. He also volunteers his time in prison ministry at the federal penitentiary in Elkton and recently was selected for inclusion in the Latino American Who’s Who list.