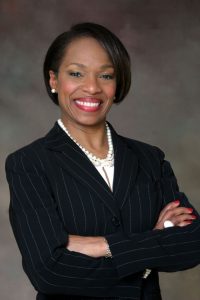 On the day she won her hard-fought battle to be the first woman and the first African American elected mayor of Douglasville, Ga., Rochelle Robinson felt a connection to civil rights pioneer Rosa Parks.

Her victory came on Dec. 1, 2015, the 60th anniversary of Parks’ history-making refusal to give up her seat on a segregated Alabama bus. “I cried when I realized the significance of that day,” Robinson recalled, “and I knew that I was standing on Rosa Parks’ shoulders. What a legacy!”

She took office a month later as mayor of the fast-growing bedroom community near Atlanta, population 35,000. Beating out an incumbent mayor with 62 percent of the vote was especially sweet for Robinson because she narrowly lost her first attempt to win the seat in 2011.

The former Rochelle Martin grew up on Youngstown’s South Side and enrolled at YSU in the early ‘80s with plans to become a nurse. Later, she changed her major to Communication and planned a broadcasting career with two classmates – Madonna Chism Pinkard, now communications director for WFMJ-TV in Youngstown, and Sharon North, a public relations manager for the city of Richmond, Va.

But the Central Intelligence Agency had other plans for Robinson. She was a senior and an Ohio Army National Guard veteran attending college on the GI Bill when she met CIA recruiters at a university job fair. A YSU cheerleader, longtime runner and gymnast, Robinson was well equipped for the physical rigors of CIA training, and she already had military security clearance.

Soon after, in 1986, she accepted a commission as a federal law enforcement officer, trained at the Federal Law Enforcement Training Centers and began an eight-year run with the CIA. Based in Washington, D.C., she traveled the world – including some time in Helsinki, Sweden, the one location she’s permitted to mention. She lived under an assumed name and was often out of contact with friends and family for months at a time. “I did some VIP security, that’s all I’m free to say,” she said.

All that changed in 1994 when Robinson visited a church in Atlanta to attend the christening of a friend’s infant and met a young pastor there. A year later, she moved to Georgia, left the CIA and married the pastor, the Rev. Mr. Jeff Robinson.

Following the example her mother had set for her while growing up in Youngstown, Robinson became involved as a volunteer in Douglasville, her new city of residence, joining numerous community boards and committees and eventually winning election to city council.

“I would say that it is phenomenal for me to be the first African American woman to be mayor, but it happened organically,” she said, explaining how years of community service helped her to develop wide-ranging support and recognition.

In her first nine months in office she helped fund a decorative street lighting program to beautify the downtown and advanced collaboration by combining the city and county community development offices. She met with city council members to insist that they stop bickering at public sessions and treat each other with respect – and so far, it’s working. ‘One council member asked me: ‘Are you the mama?’” she said. “Well I guess I am.”

In addition to her mayoral duties, Robinson and her husband have three children, all in their teens. Also an ordained minister, she co-pastors a church with him in nearby Rex, Ga.