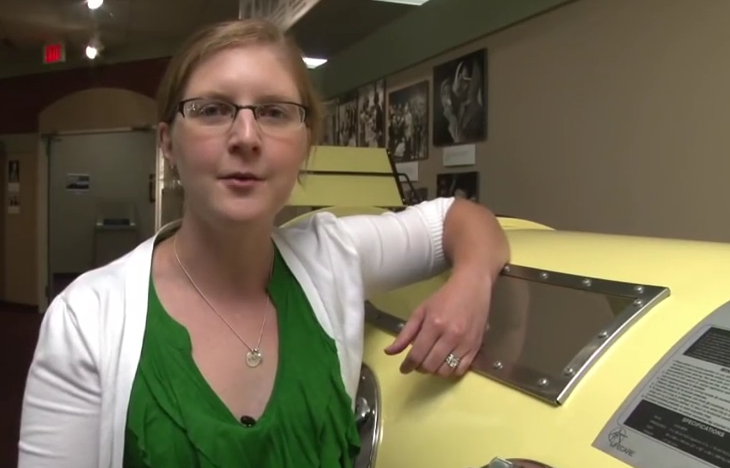 Cassie Nespor, curator of the Melnick Medical Museum at YSU, with the Iron Lung in the video.

A video about the Iron Lung at the Rose Melnick Medical Museum at Youngstown State University, which has had nearly 90,000 views on YouTube, has now caught the attention of the Bill and Melinda Gates Foundation.

The video was used as part of an event and exhibit for World Polio Day on Oct. 24 at the Gates Foundation’s visitors center in Seattle. The Foundation is a major supporter of the Global Polio Eradication Initiative, along with Rotary International.

The Iron Lung is a respirator that was used widely during the U.S. polio epidemics in the 1940s and 1950s.

The 3-minute, 13-second video was made in 2011 by Dan McCormick, network administrator in YSU’s Media and Academic Computing, and features Cassie Nespor, curator of the Melnick Medical Museum at YSU. In the video, Nespor provides a brief history of the machine, a demonstration of how the it works and even gets in the “Lung” herself. View the video here: https://www.youtube.com/watch?v=xUOlLNKBHiY.

The Melnick Medical Museum’s Iron Lung, a 1952 Emerson model, will be on display in the atrium of Cushwa Hall this week, Oct. 26 to 30, in recognition of Respiratory Care Week. In addition, a modern ventilator will be on display.

Nespor said the Iron Lung at the Melnick Medical Museum is the most remembered and loved artifact in the Melnick collection for most visitors.

The Melnick Medical Museum has other displays in Cushwa Hall that are open to the public during building hours. On the lower level off Lincoln Avenue there are three displays about historical contraceptive devices, the Campbell Trachoma outbreak of 1913, and historical surgical tools. On the second floor is a display of historical nursing uniforms, and on the third floor is a display about quack medicine and the growth of the Food and Drug Administration.