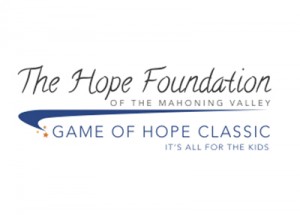 The KIDS Fun Zone, featuring inflatables and games for children, opens at 1 p.m., with tip-off for the basketball game at 3 p.m. Teams comprised of community leaders, elected officials and media will play.

The event has raised thousands of dollars over 11 years for chronically/terminally ill children. Tickets are $5 for adults and $3 for children 12 and under.

Detective John Gocala, Jr. of the Boardman Police Department, will be head coach of Team Hope, while former Cleveland Browns player Felix Wright will be head coach of Team Kings. Steve Jones of the Steven Jones State Farm Agency will serve as owner of Team Hope, and Larry Rizer of the Mahoning County Masco Workshop will be the assistant coach. Warren City Law Director Greg Hicks will serve as team owner of Team Kings, and Ron Iarussi of the Mahoning County Educational Service Center will be assistant coach.

Bishop George V. Murry of the Diocese of Youngstown will give the blessing, and Cortney MacKay from Hubbard will sing the national anthem. Zac Humphries will call the play-by-play, while Thomas John from Clear Channel Youngstown will serve as the master of ceremonies.

Other activities include a performance by Natalie’s Dance Co. of Warren, and a $5 for $50 half-court shot competition. Also, there will be an opportunity to put a pie in the face of Hope Foundation Founder Anthony Spano,

In addition, representatives from The Gibson Agency will be on hand to present a $5,000 check to the Hope Foundation of the Mahoning Valley from the Giving Campaign, which was held this past holiday season.

The Hope Foundation of the Mahoning Valley’s is a non-profit 501(C)3. The mission of the foundation is to provide charitable and financial support and volunteer services to chronically and/or terminally ill children. For more information on donations and televised information, as well as how you can be a part of this great event and the foundation, please visit www.hopemv.org