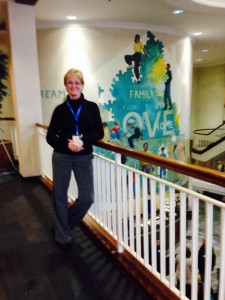 Twenty children have called Kim Anderson “Mom” since she became a foster parent eight years ago, and the experience has radically changed her retirement plans.

“So this is my life, part two,” said Anderson. “I’m retired, I just graduated from college, I’ve started a new career and I’m getting ready to adopt a toddler.”

Anderson started working right out of high school as a children’s photographer for Lifetouch Portrait Studios at J.C. Penney, advancing to a management position and retiring after 37 years. She had never considered college because of her demanding retail hours, but early retirement suddenly made it possible.

She continued as a foster parent throughout college, sometimes sharing her home with as many as four children at a time. “There was one period when I had four foster kids with me, all under the age of 5, and I was going to school full time,” she remembered with a laugh. “Now that was a busy time.”

Anderson threw herself wholeheartedly into student life – she served two internships at Summit County Children’s Services, volunteered for the Red Cross, served as president of YSU’s Student Social Work Association, and always excelled in the classroom. In her senior year she brought honor to her university when the National Association of Social Workers named her Ohio Social Work Student of the Year; previously, she had been named NASW’s Student of the Year for the Northeast Ohio region.

As a foster parent, and now as a social worker, Anderson tries to forge relationships with families and help them to see her as an ally, not a threat. “My supervisor describes me as an optimist because I see the potential in people,” she said. “I want to believe that, if we give people the resources they need, they can change. And I try to always treat people kindly and with respect. I think everybody deserves that.”

Drawing on her previous experience as a family photographer, she likes to get professional photos taken of the foster children in her care and shares the photos with their parents. “The parents love that,” she said. “It helps them feel closer, and the kids grow so fast.”

Many of her foster relationships have become success stories – she’s kept in contact with most of the children she’s cared for over the years, and some of their families. But there is one child, a little boy who came to her at three-months and is now nearly two, that Anderson doesn’t want to let go. She has decided to adopt him, if the legalities can be worked out.

“When I signed up for training to be licensed as a foster parent, another parent suggested that I get the “foster-to-adopt” certification. She said I might need it someday,” she said. “I guess I’m glad now that I did that, because it’s happened to me. The heart wants what the heart wants.”

Anderson has two adult children, both living in the Mahoning Valley. Her daughter, Alexis Schmidt, earned bachelor’s degree in Education at YSU and teaches in the Austintown Schools; and her son, Adam DeRaud, is a junior studying business at YSU.