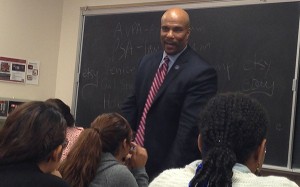 Clark, who earned bachelor’s and master’s degrees in Criminal Justice from YSU, estimates that the crime-fighting programs he helped initiate since joining the FBI in Los Angeles eight years ago have resulted in more than 6,700 arrests.

“I could sit behind my desk, just based on that number alone, and people would say, ‘Robert – career well done,’” he says. “But, I don’t care about that. I care about returning health, healing and reclamation to these communities.

“When we have returned playgrounds to kids, made bus stops safe, neighborhoods safe so kids can actually play outside in their yards and families can walk to church and walk to work – those are some of the marks of success in my career.”

And that’s exactly what Clark has done since moving to Los Angeles in 2007.

For those efforts, the Los Angeles Police Department this year awarded Clark its inaugural Southwest Broome Award, presented to individuals who have provided substantial contributions to the development of the young men and women of SW Los Angeles.

As FBI assistant special agent in charge of the Los Angeles Field Office, Clark and his staff of 350 agents and others oversee gangs, violent crime, organized crime, crimes against children and drug cartel activity in a sprawling 900-square-mile stretch of southern California.

But it was on the streets of Youngstown’s South Side that Clark cut his teeth. He spent much of his youth – from age 4 to 12 – in foster care. In 1980, Clark’s father, who operated the mob-owned Casablanca Nightclub, was murdered. “A drug disagreement, and he lost,” Clark says. His mother, whose family Clark says also had some connections to organized crime, worked as a dancer, leaving young Clark at home many days and nights to take care of his younger sister.

“I was in and out of trouble, a lot,” recalls Clark, an outside linebacker at Cardinal Mooney High School who went on to YSU to play for the Penguins as a walk on.

A year later, he left school for the Ohio Police Academy, graduated, worked as a reserve for the Austintown police and then, in 1989, joined the Youngstown Police Department, where he initially worked cocaine undercover operation. “I loved it,” he remembers. He worked six years in the YPD’s Special Investigations Unit, building a reputation as a budding expert on the burgeoning gang problems facing the city.

That’s when he attended an FBI recruiting event on the YSU campus. “I walked up to this agent and he handed me his business card,” Clark said. “It had an embossed FBI seal on it. I rubbed my thumb over that seal and thought, ‘Man, one day, my name is going to be on that card.’”

By 1995, he was a special agent, first in Chicago, then on protection detail for the attorney general in Washington D.C. – his second day on the job was Sept. 11, 2001. In 2004, he was promoted to FBI headquarters and the MS-13 National Gang Task Force. Three years later, he was assigned to Los Angeles to help fight the infamous MS-13 gang. In the ensuing eight years, Clark has overseen eight major initiatives, from developing a trans-national anti-gang unit in Central America to a program in which police and agents return to neighborhoods after gang busts to clean alleyways of trash and graffiti and offer mentoring programs for at-risk youth.

Through it all, Clark has learned one thing: it’s all about relationships.

“I know what it’s like to be that kid whose parents are absent or not involved, who can’t go outside and play because it’s too violent, can’t go to the playground because there are too many gangs or violent influences, or can’t walk down the street to their community center or city pool or school because you have to walk through three different gang neighborhoods and get challenged and probably assaulted. I’ve lived it and know how fear can control your education, development and abilities to dream.

“So, when I talk to kids, I always tell kids that hurt people – hurt people. But that hurt people hurt themselves the most. I also share with them that healed people have a responsibility to heal people. I have chosen to use my pain and my hurt as motivation to make a difference in the lives of others, not to impress them about what ‘I’ve done,’ but inspire them to dream about what they can accomplish.”