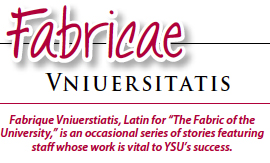 When Ed Villone started working as a security guard for Strouss department store in Boardman in 1979, he didn’t know it would be just the beginning of a successful career in criminal justice. Villone is now commander and coordinator of the YSU Police Academy in Cushwa Hall.

In 1980 he joined the Struthers Police Department as a reserve police officer and civilian police dispatcher. Later, he served as a patrol officer for the Poland Township Police Department, and then returned to Struthers, where he retired as a police captain in 2006. He came to YSU in 2008 as an academic advisor for the Bitonte College of Health and Human Services, was promoted to instructor for Criminal Justice and Forensic Sciences and then to coordinator at the Center for Student Progress. 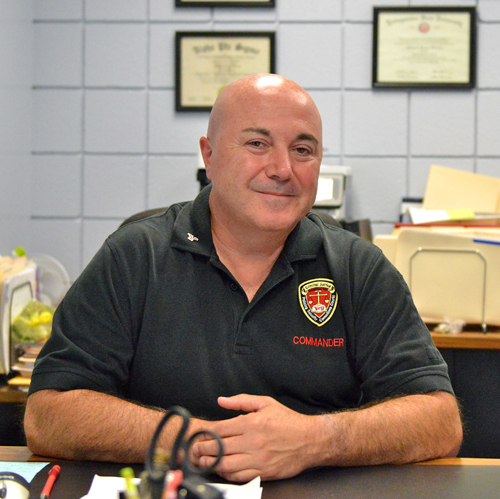 Villone was named Police Academy commander in 2013, and he’s worked to develop new programs to educate his cadets and help them to be more marketable. “I don’t quit,” he said. “Whatever the issue may be I keep moving.”

As commander, he has developed pre-physical fitness testing, a supplemental instruction program, a laser targeting firearms system, canine training, CPR training and Naloxone training for treatment of drug overdose victims. He developed a partnership for repurposing military equipment that has provided more than $500,000 in weapons and equipment for the Academy and created an M16 rifle certification training, the first of its kind offered by an Ohio police academy.

He earned an MS in Criminal Justice and a BS in General Studies, both from YSU. He was a military policeman, is a veteran of the National Guard, a member of the Advisory Board for Criminal Justice at Mahoning County Career and Technical Center, a member of the YSU Safe Zone Council, President of the YSU Emergency Preparedness Committee and president-elect of OEA APAS.

Villone and his wife, Laraine, also an educator, live on Lake Milton and are renovating a bar they plan to open as a restaurant called “The Prop House.” He also holds a black belt in taekwondo.