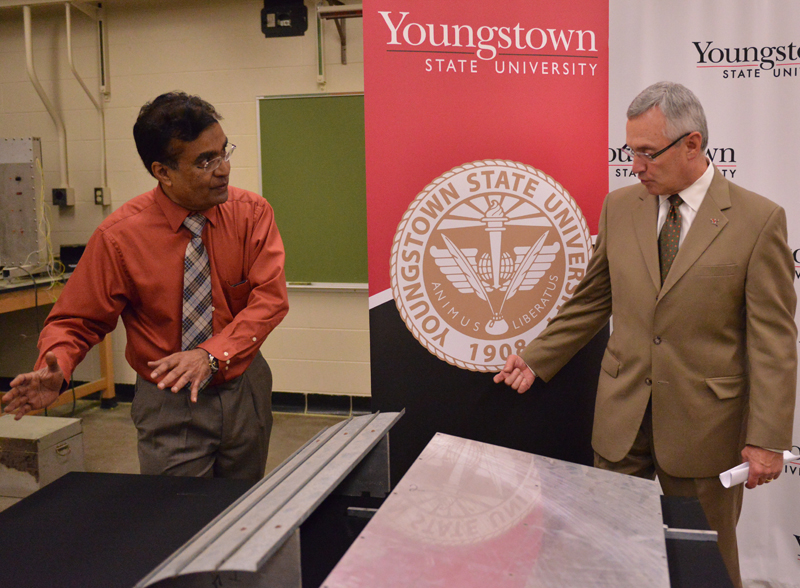 Ganesh Kudav, professor of Mechanical Engineering at Youngstown State University, has been awarded a federal patent for an invention that will help prevent solar panels from being blown off rooftops.

It is the second patent for YSU in less than a year. Physics Professor Tom Oder received a patent in the fall for a method he devised that improves the performance and reliability of semiconductor devices.

“This invention is another indication of YSU’s continued pursuit of knowledge and excellence and our emergence as a research university,” YSU President Jim Tressel said.

The invention focuses on solar panels that are placed on flat rooftops. In strong winds, the solar panels are at risk of getting blown off the roof, Kudav said. The conventional method to secure the panels is by holding them down with heavy dead weights called ballasts. The ballasts, however, can be expensive, take up considerable space, and their weight can sometimes exceed the structural limits of the roof.

The patent was awarded for designing a device that deflects wind from the solar panels, keeping them in place without weighing them down. Approval of the patent was granted earlier this spring.

“We believe this design helps resolve one of the biggest issues facing the solar panel industry today,” Kudav said. “The design provides a deflector that is versatile, achieves aerodynamic force reduction and is easy to assemble and install. Overall, it makes the installation of roof solar panels safer and more economical.”

For more information on the patent, visit http://patft.uspto.gov/ and search for patent number 9,003,739.