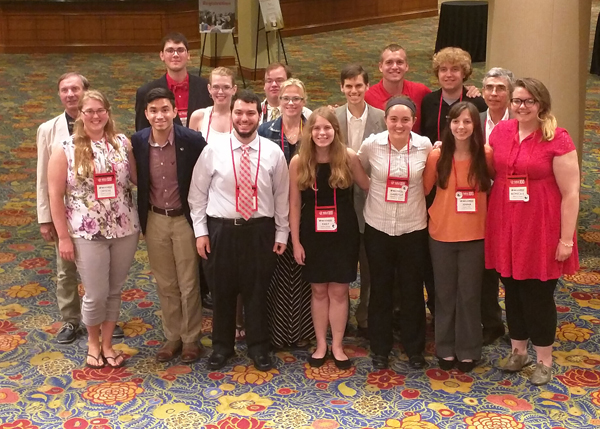 MathFest is the annual summer meeting of the Mathematical Association of America and Pi Mu Epsilon. In all, 12 YSU students attended and gave oral presentations of their research projects. Five students won awards, the most from any university at the competition.

The YSU team has historically been one of the most successful at the annual event. YSU won its first award in 1989 and has won at least one award every year since, except in 1992 and 1994. YSU students won a record number of awards in 2013 with six. The team won five awards in 2005, 2006 and again this year.

Since 2000, YSU students have averaged 3.5 awards per year. No other school has won more than three awards in any one year.

The five students winning awards for excellence in student exposition and research this year are:

Jenna Wise and Eric Shehadi also represented YSU at a special session for students in applied mathematics. They presented a poster of their collaborative project with the Youngstown Police Department to examine the workload among the police beats in the city of Youngstown. This work was conducted through a Preparing for Industrial Careers in Mathematics grant under the direction of Tom Wakefield.

Yates said MathFest is about more than winning awards, but it’s about “the lessons learned through the hard work needed to do a research project and in presenting the results in a clear and informative talk at a national meeting of mathematicians.”

“Many of our alumni have told us that this was one of the most useful experiences they had as an undergraduate at YSU, and this is our biggest reward,” he added.