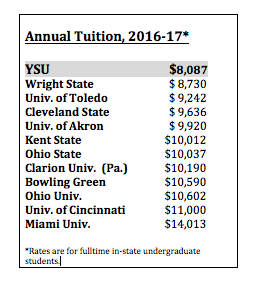 Tuition, fees and housing costs will be frozen at current levels for next academic year at Youngstown State University, maintaining the university’s status as the most affordable public university in Ohio and Western Pennsylvania.

The YSU Board of Trustees’ Finance and Facilities Committee on Thursday approved a fiscal year 2017 budget that, for the second consecutive year, includes no tuition increase for undergraduate students. The full board will vote on the resolution later this month.

Full-time tuition will remain at $8,087 a year for Ohio residents, the lowest among the state’s largest public universities and nearly $1,600 below the statewide average.

In addition, full-time tuition for out-of-state undergraduate students living in the 22-county Affordable Tuition Advantage area in Pennsylvania, West Virginia and New York will remain at $8,327 a year. The rate is well below tuition at competing universities in western Pennsylvania.

“In light of growing public concern over rising college costs and student debt, YSU continues to work hard to keep student expenses as low as possible and to position itself as the most affordable quality option in the competitive state and regional higher education marketplace,” YSU President Jim Tressel said.

In addition to undergraduate tuition, the board voted to freeze more than 100 other fees for next academic year, including lab and materials fees, parking permits, transportation fees and late fees.

Room and board fees for YSU residence halls also will go unchanged for next academic year. The $8,990 annual housing fee is the lowest, by as much as $3,000, among Ohio’s comprehensive, four-year public universities.

While tuition for undergraduates is staying the same, rates for graduate students will increase 2.5 percent for next academic year to $5,781 per semester.

The $169.8 million fiscal year operating budget approved by the board assumes stable enrollment and a 2.2 percent increase in state funding. It is YSU’s first operating budget in five years without a structural operating deficit.

“Since 2012, when state funding support dropped sharply and YSU’s student enrollment levels continued to fall, the university experienced revenue shortfalls that outpaced efforts to reduce expenses,” said Neal McNally, vice president for Finance and Business Operations. “But through a combination of strategic investments in student recruitment, modest revenue enhancements, and spending reductions, the budget deficit has been erased.”

The board committee also on Thursday approved the university’s efficiency review and implementation plan, which includes dozens of recommendations on how to increase cost savings on campus.