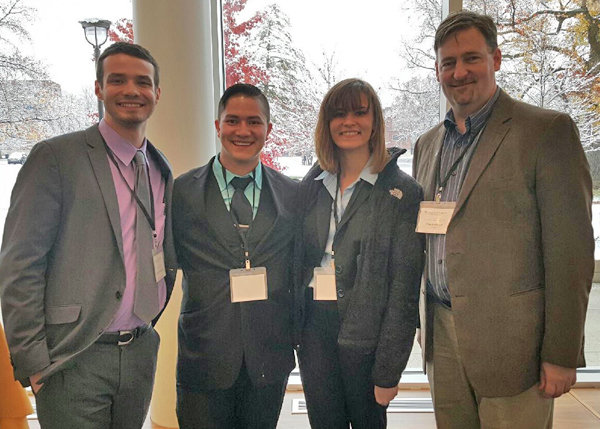 Members of the YSU Ethics Bowl are, from the left, Jacob Schriner-Briggs of Austintown,
Tyler Miller Gordon of Hubbard, and Lindsay Heldreth of Canfield, along with Alan Tomhave, coach and associate professor of Philosophy.

It’s on to the national finals for a team of Youngstown State University students.

The three-member team competed in the regional Intercollegiate Ethics Bowl contest in Indianapolis earlier this fall and earned a spot in the national tournament February 2016 in Reston, Va., hosted by the Association for Practical and Professional Ethics.

Alan Tomhave, associate professor of Philosophy, was the team’s coach.

The Indianapolis contest was among 10 regional Ethics Bowl competitions across the United States and Canada.

The competitions focus on a set of 15 cases. Teams have slightly less than two months to study and research the cases. At the competition, teams do not know which of the 15 cases they will have to address, nor do they know the question that they will have to answer. Further, they are not allowed any notes on the research that they have done on any of the cases. Once a case is revealed and the question is asked, the team has either one or two minutes (depending on whether it is a regional or national Ethics Bowl) to prepare a presentation. The presentation must offer a moral argument to answer the question and consider potential objections to the team’s position. A second team then provides a commentary on the first team’s argument, with the original team then getting a chance to respond. Finally, there are three judges who get to ask questions. At this point, a new case is presented and the two teams reverse roles. This process would constitute one match, with an entire Ethics Bowl competition being composed of numerous matches. The teams need not disagree with each other and a heavy emphasis is placed on civility, with the goal being a discussion on important ethical issues.