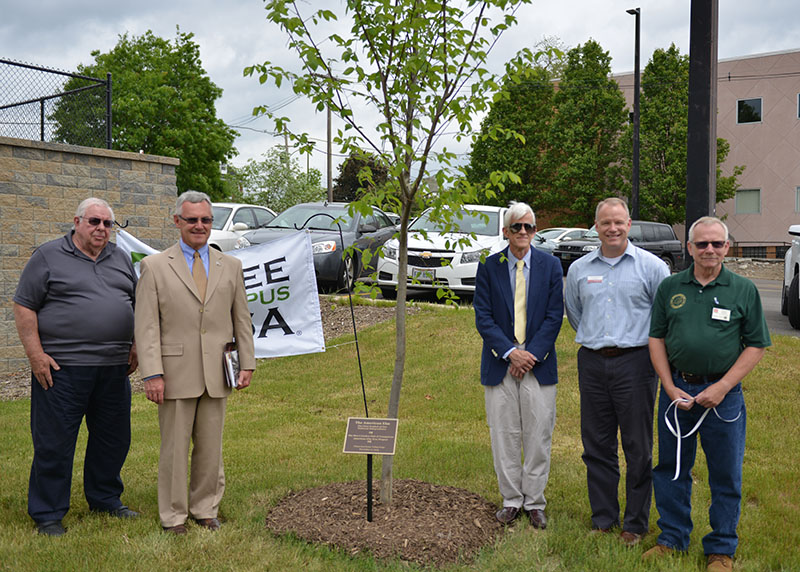 The trees were dedicated in recognition of the Men’s Garden Club of Youngstown, which donated and planted them as part of its American Elm Project. “The American Elm is such a magnificent shade tree,” said Larry Tooker, a garden club member and YSU retiree who proposed the Veterans Resource Center as a planting site. “We think it’s important to bring this majestic tree back to the landscape of American cities.”

YSU, which has nearly 2,000 trees on its campus with an estimated value of $2.2 million, first received Tree Campus USA status from the Arbor Day Foundation in 2009 and must reapply annually. YSU is one of just 245 campuses nationwide to achieve Tree Campus USA status. The program honors colleges and universities for effective campus forest management and for engaging staff and students in conservation goals.

“Planting these beloved American Elm trees is a great way to celebrate National Arbor Day and to call attention to the fact that YSU works hard to preserve its trees and green spaces for future generations of students,” said Catherine Cala, chair of YSU’s Campus Beautification Working Group and director of Alumni Engagement.

Garden clubs and other groups nationwide are participating in an effort to plant disease-resistant American Elms in cities, such as Youngstown, where the elm tree population was decimated by Dutch Elm disease. The Men’s Garden Club of Youngstown has planted American Elms at nine other public property locations around Mahoning and Trumbull Counties, Tooker said, and has a 15-tree test plot in a Mill Creek MetroParks nature preserve.

Tooker played a role in establishing gardens at Mill Creek MetroParks when he served as park horticulturist from 1970-1982. He later spent more than 25 years with YSU’s Grounds Department, working with Student Government volunteers in 2007 to refurbish the Pollock House gardens. Tooker has a bachelor’s degree in horticulture from Michigan State University.

YSU’s Veterans Resource Center opened last fall to provide expanded services for military veterans and active military making the transition to student life at the university. The $1.3 million building is being paid for entirely by private donations through an ongoing fundraising campaign.