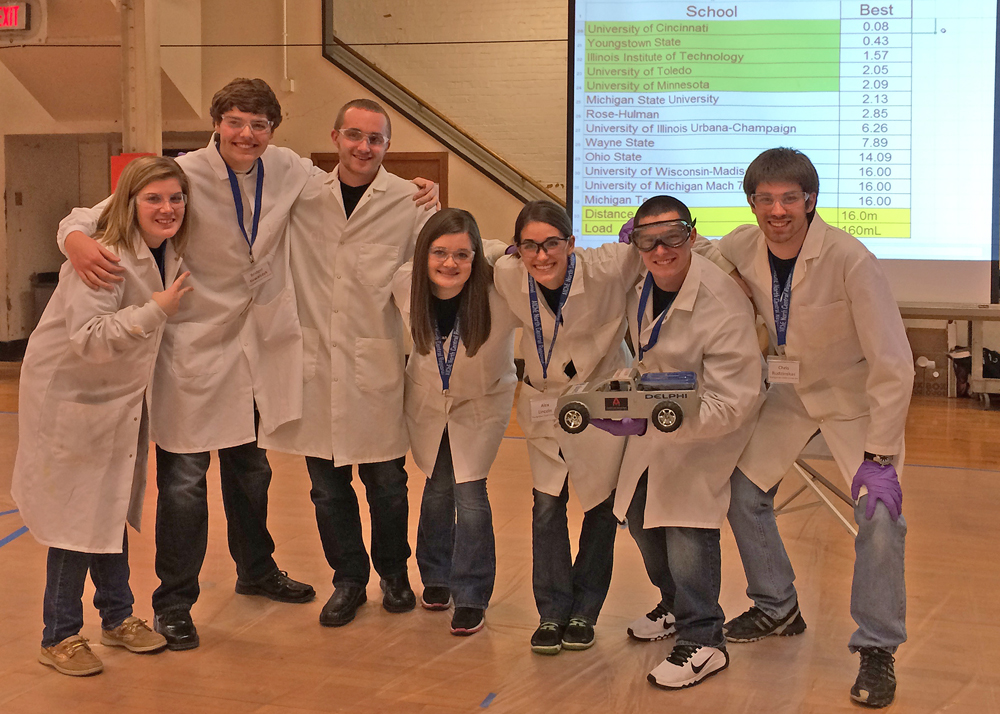 A team of Youngstown State University students bested teams from universities across the Midwest and placed second at the regional Chem-E-Car contest in Illinois.

The team is now eligible to compete at the national tournament in Utah.

Chem-E-Car is a competition hosted by the American Institute of Chemical Engineers in which college students design and construct a small car powered by a chemical energy source.

The YSU car was 3-D printed in the form of a truck. The cab of the truck carried a water container, as required in the competition. The team used a penguin to cap the water container and “drive” the vehicle.

Martin said the car was powered by a zinc-carbon dry-cell battery and stopped by an iodine clock reaction that turned dark after a certain amount of time, based on concentration, turning off the laser and breaking the circuit. The car then coasted until it came to a stop, approximately 0.43 meters past the announced 16-meter distance.

The YSU team was sponsored by Vallourec, Delphi and YSU Student Government Association, which provided monetary support. CIAM designed and 3-D printed the car and the water container. Michael Crescimanno, professor of Physics and Astronomy, assisted the team with circuitry. Tim Styranec with the YSU Office of Environmental and Occupational Health and Safety assisted with chemical ordering and shipping, while John Dodson and Larry Davis assisted with car modification and build.

YSU will now compete at the national tournament in November in Salt Lake City.