YSU only fourth public university in Ohio to receive the award 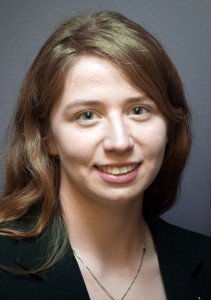 Ashley E. Orr of Columbiana, Ohio, a senior at Youngstown State University, has been named a Rhodes Scholar, the first YSU student to receive the prestigious international scholarship.

YSU is only the fourth public university in Ohio to have a student win the award in the Rhodes’ 112-year history, joining Ohio State University, Miami University and the University of Cincinnati.

“Ashley Orr’s commitment to excellence in the classroom and service to YSU and the Youngstown community propelled her to the top of a highly competitive group of applicants,” said Amy Cossentino, director of the YSU Honors College. “The receipt of this highest award is a testament to the premiere education available to students at Youngstown State University.”

Orr, a Mathematics and Economics double major at YSU, said she is honored to represent YSU and the Youngstown area as a Rhodes Scholar.

“As a first generation college student, I am so appreciative of the support I have received at YSU, specifically within the Honors and Scholars programs,” said Orr. “I am a direct product of my peers, mentors, and friends and family; so thank you.”

She added:  “I hope my peers across YSU’s campus take advantage of the amazing opportunities that YSU offers all of us, and further, that they believe, as I do, that YSU students can and are changing the world for the better. I am confident that there will be more YSU Rhodes Scholars.”

The Rhodes Scholarship is “the oldest and best known award for international study, and arguably the most famous academic award available to American college graduates,” said Elliot F. Gerson, American secretary of the Rhodes Trust.

The scholarships provide all expenses to study at the University of Oxford in England and are valued at about $50,000 a year. The first class of American Rhodes Scholars entered Oxford in 1904; the new class will enter Oxford in October 2016.

Orr graduated in 2012 from Columbiana High School in Columbiana, Ohio. She is in the University Scholars Program in the YSU Honors College and plans to graduate with a bachelor’s degree in May 2016.

She is president of the YSU Student Government Association, co-founder of a poverty awareness program in the city of Youngstown, and is active in a wide range of volunteer service in the community. She has studied at the London School of Economics, has worked at the Federal Reserve Bank in Cleveland, and done research projects focused on public housing, crime and on poverty.