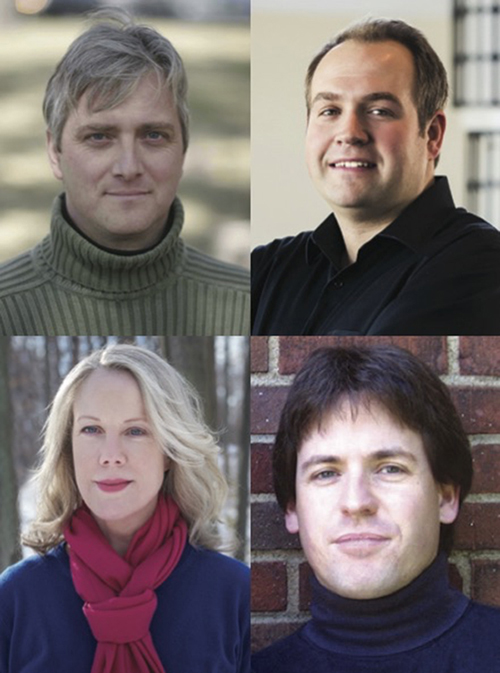 Guest and faculty artists Zahari Metchkov, Joachim Reinhuber, Caroline Oltmanns, James Wilding and Sean Baran perform a variety of piano and harpsichord selections throughout the week. Programs at YSU are free and open to the public. Program fees at the University of Akron are noted in the list below.

“I am thrilled to offer this brand new piano festival to our communities of Youngstown and Akron,” said Oltmanns, professor of piano at the Dana School of Music. “The concerts, master classes and recitals are all dedicated to the beauty of keyboard instruments, to the sounds they are able to project, and the stories we musicians get to tell through them. Come out, be part of it, get inspired and enjoy”

Oltmanns said the collaboration between Akron and YSU is a reflection of the depth and density of culture in Northeast Ohio, including Youngstown, Akron, Cleveland and Kent. The festival is meant to bring together the communities to continue the vibrant music scene, she said.

Wednesday, Oct. 7, 12:15 p.m. Music at Noon, Butler Institute of American Art, YSU. Festival participants and students of the Dana School of Music in a concert of music for piano. Free

Parking for YSU events is available in the Wick Avenue deck for a nominal fee. For more information, call 330-941-2307.

Sean Baran graduated summa cum laude from Youngstown State University’s Dana School of Music with a bachelor’s and a master’s degree in music performance. He studied piano with Dr. Caroline Oltmanns and organ with Dr. Daniel Laginya. Sean currently teaches keyboard musicianship, and music theory courses at Youngstown State University. In addition, Sean is the organist at Boardman United Methodist Church. He is an active performer as both a soloist and collaborator. In 2010, Sean won the Dana Young Artist Contest, which led to a performance of the Tchaikovsky Piano Concerto with the Dana Orchestra. He was a featured soloist with the Dana Symphonic Wind Ensemble in 2011. In 2014, Sean was accepted to participate in the Zodiac Music Academy and Festival, which took place in southern France. Passionate about piano pedagogy, Sean maintains a private piano studio in the Youngstown area. His students frequently receive the highest ratings at local adjudicated events and can be heard throughout the area in recitals and in master classes. Most recently, his students have been heard in events sponsored by the American Guild of Organists and the Cleveland International Piano Competition.

Both a pianist and an organist, Dr. Zahari Metchkov has performed at such venues as New York’s Avery Fisher Hall and Washington’s Kennedy Center. Dr. Metchkov released his first CD in 2008 – a recording of works for piano and orchestra by Liszt and Franck and a second recording project featuring solo works for piano and organ completed in 2014. A native of Sofia, Bulgaria, Dr. Metchkov holds BM, MM, and DMA from the Cleveland Institute of Music, Cleveland, Ohio. In 2010 he joined Colorado State University-Pueblo’s department of music and is currently an Associate Professor of Music. He was the 2013 recipient of the CSU-Pueblo’s Outstanding Service and Transformative Leadership Award and the 2014 recipient of CHASS Outstanding Faculty of the Year. Dr. Metchkov has also taught at the Cleveland Institute of Music as well as Youngstown State University. Currently Dr. Metchkov is the Artistic Director of the Pueblo Keyboard Arts Festival and Piano Conversations Concert Series, Pueblo, as well as Rocky Mountain Music Alliance Concert Series, Colorado Springs. He also serves as Vice President for Conferences for the Colorado State Music Teachers Association. As a performer he has appeared in the Mostly Mozart Music Festival, Pianofest in the Hamptons, Bridgehampton Music Festival, Geneva Chamber Music Festival, New Year’s Music Days Festival, and San Angelo Piano Festival.

“Flawless, eloquent, and always enlightened by clarity” (Daniel Hathaway, www.clevelandclassical.com) pianist Caroline Oltmanns delivers impeccable musical phrasing and engaging stage presence, attracting audiences both in the US and abroad. This season, Ms. Oltmanns offers an array of solo recitals and concert tours along with new creative paths in the co-production and performance of the concept show ‘Crumb’s Kaleidoscope’. Past seasons have included concerto appearances with the Youngstown Symphony, Johnson City Symphony Orchestra, Harburger Orchester Akademie, and Cleveland Philharmonic Orchestra in addition to the commission, premiere and recording of several new concerti. Caroline Oltmanns has produced and recorded five solo CDs on the Filia Mundi label; her playing has been broadcast globally on radio and TV stations. As an International Steinway Artist, Fulbright Scholar, and recipient of the Stipendium der deutschen Wirtschaft, she is a Professor of Piano at Youngstown State University and holds degrees from the Staatliche Musikhochschule Freiburg and the University of Southern California in Los Angeles. Her musical mentors were Robert Levin, John Perry, Vitaly Margulis, and Malcolm Frager.

Dr. Joachim Reinhuber serves as Associate Professor of Piano at Texas A&M University, Kingsville, and is in high demand as solo and collaborative performer, clinician, and adjudicator in the US and his native Germany. He studied with Gisela Sott (Frankfurt), Robert Levin (University of Music, Freiburg), John Perry (Rice University, Houston TX), and Nancy Garrett (University of Texas at Austin). As a faculty member of the City of Aschaffenburg Music School he taught piano, chamber music, and music theory. In August 2006 he and his family moved to Texas, where he completed a Doctor of Musical Arts degree in piano performance at the University of Texas at Austin. Recent performances include Brahms’ and Beethoven’s first piano concertos, the Schumann concerto, Bach’s concerto in D minor and the Stravinsky concerto for piano and winds. In 2012 and 2014 he was the pianist for the Texas Music Educators Association’s All-State Men’s Choir, in 2013 for the Texas Two Year College All-State Choir. In 2013 and 2014 he toured extensively throughout Texas and the United States, with a residency at the Keyboard Arts Festival in Pueblo, CO, and over 30 solo piano recitals at, among others, the University of Texas at Austin, Texas A&M International University, Bowling Green State University, Youngstown State University, Baylor University, and the University of Arkansas in Fayetteville. As a collaborator, he has worked with Marianne Gedigian, former principal flutist of the Boston Symphony Orchestra, the baritones Ronald Ulen and David Small, and the pianists Zahari Metchkov and Johan Botes. He has served as an adjudicator at the Sorentin International Competition in San Angelo, TX, the Laredo International Piano Competition, and the State Concerto Competition of the Texas Music Teachers‘Association in Huntsville, TX.