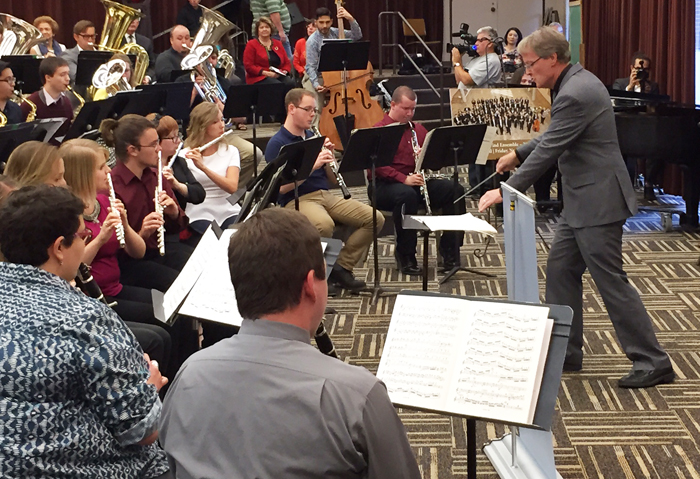 Stephen L. Gage, professor of Music and director of Bands and Orchestra at YSU’s Dana School of Music, directs the YSU Wind Ensemble as part of a news conference announcing the ensemble’s performance in Carnegie Hall in New York in November.

Very few university musical ensembles ever get invited to perform at the historic Carnegie Hall in New York. Even fewer get invited back for an encore appearance.

But that’s the case for YSU’s Wind Ensemble.

Ten years after its debut at one of the world’s preeminent concert venues, the 55-student Wind Ensemble has been invited to perform again at Carnegie Hall – 8 p.m. Friday, Nov. 27.

“We are honored and excited to be able to once again showcase the YSU Wind Ensemble in one of the world’s most acclaimed concert sites,” said Stephen L. Gage, professor of Music and director of Bands and Orchestra at YSU’s Dana School of Music. 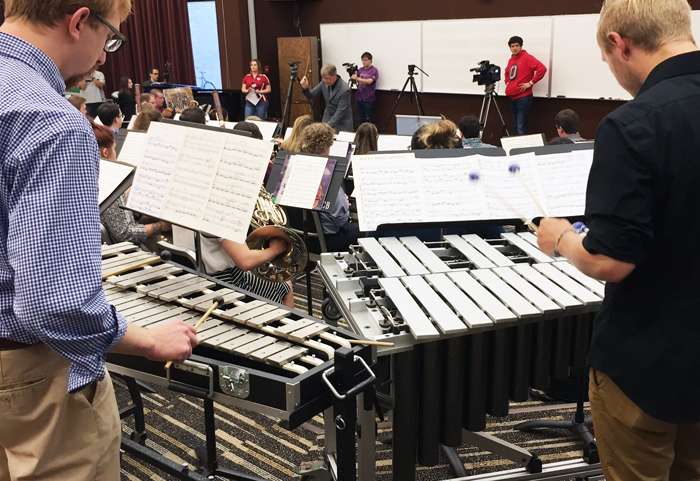 Michael R. Crist, interim dean of the College of Creative Arts and Communication, said: “Musicians spend a lifetime refining performance skills and developing intimate nuances preparing for the truly significant musical performance. Even a neophyte musician has knowledge of the historical importance of a performance venue like Carnegie Hall.”

The performance on the day after Thanksgiving is part of Manhattan Concert Productions’ National Festival Chorus concert. For more details on discounted tickets, a pre-concert alumni event and travel arrangements, visit www.ysunews.com.

The YSU Wind Ensemble has performed at music festivals and conferences around the nation and has released seven professionally produced and critically acclaimed CDs.