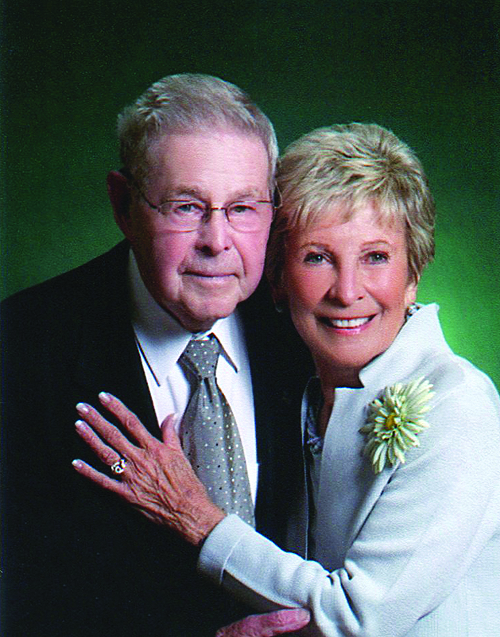 Frank and Norma Watson of Canfield have donated $1 million to Youngstown State University to support the development of a new Student Success Center on campus.

“On behalf of everyone here at YSU, we thank the Watsons for their continued generosity,” YSU President Jim Tressel said. “Their support over more than four decades has helped countless YSU students and has been a driving force in the university’s growth and development.”

Frank Watson graduated from Youngstown University in 1949, was a member of the YSU Board of Trustees from 1978 to 1987, is one of the original members of the YSU Foundation Board of Trustees and chaired the fund-raising campaign for the construction of Stambaugh Stadium on campus in the 1970s.

“It has been our privilege to watch YSU evolve and grow into the respected institution of higher education that it is today,” Watson said. “We are honored and blessed to be able to make this pledge and support one of the valley’s greatest assets.”

In recognition of the donation, the university will name its new student success center after the Watsons. The new center will consolidate all services related to student retention and success on the third floor of Jones Hall and will include construction of a connector linking Jones Hall with Maag Library.

“The Frank and Norma Watson Student Success Center will help thousands of students reach their educational goals and will serve as a lasting legacy of the Watsons’ lifelong devotion to YSU,” said Paul McFadden, president of the YSU Foundation, the designated philanthropic arm of the university.

This is the latest in a series of gifts to YSU by the Watsons, who received the YSU Friends of the University Award in 2007. They also have made significant donations for YSU’s Stambaugh Stadium, the Scholarship Loge program, the Andrews Student Recreation and Wellness Center and the indoor training facility, called the Watson and Tressel Training Site.

Frank Watson, a native of Webster, N.Y. who served in the Navy in the Pacific during World War II, was president of Youngstown Welding and Engineering Co. from 1959 to 1998. Upon his retirement, Watson was city manager of Canfield from 1989 to 1991.

He served on the boards of the Dollar Savings and Trust Co., Ohio Bancorp, Ohio Edison and the Youngstown Hospital Association. He also was a member of the Canfield Board of Education from 1967 to 1975. In 1964, he served a year as president of the greater Youngstown Area Chamber of Commerce.

He has received the National Philanthropic Award, the Leadership Mahoning Valley Award and the YSU Alumni Society’s Distinguished Citizen Award. He also received an honorary doctor of science degree from YSU in August 2003.

Norma Watson has devoted her life to her family and community. She has served as a volunteer for many area organizations, including the Federated Women’s Club, Mahoning County Residential Financial Cancer Campaign Chair, Friends of American Art, Fellows Riverside Gardens and the Youngstown Playhouse. She is also an active member of the Canfield Republican Women’s Club.

She has served as president of Canfield United Methodist Women, was involved in its annual Budget Campaign and has held several other positions within the church.
The Watsons have been married for more than 66 years. They have two daughters, Janet Stephens and Ellen Tressel, and four grandchildren. Their son, David, is deceased.