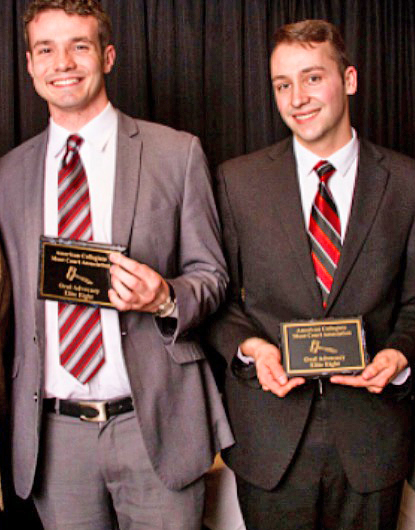 The ratings were based on individual speaker points awarded Schriner-Briggs and Massaro in debate competition, and their two-person team also ranked near the top against 80 other university teams from all over the country in the two-day event. They were awarded a plaque for ranking among the top eight teams in the country, which is known as the “elite eight.” It was the third trip to the nationals for Massaro and Schriner-Briggs.

Jillian Smith of Canfield and Michael Marshall of Boardman also represented YSU, qualifying for nationals at the regional Moot Court

tournament at Saginaw Valley State University and competing as a team in the California event.

Paul Sracic, professor and chair of Politics and International Relations, coached YSU’s Moot Court teams. “We are extremely proud of all the students that compete in Moot Court,” he said. “They have to be able to grasp complex legal arguments and respond to difficult questions, oftentimes posed by sitting state and federal court judges. This also proves, I think, that YSU has one of the finest pre-law programs in Ohio and arguably in the nation.”

He said YSU is the only publicly funded university in Ohio to sponsor a Moot Court team; the College of Wooster and Ohio Wesleyan were the only other Ohio schools represented at the national event.