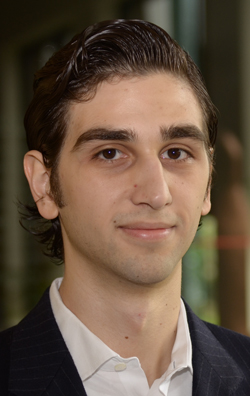 When Cameron Dinopoulos enrolled as a student at Youngstown State University in Fall 2013, he was already in a hurry to finish – but his plan worked even better than he expected.

“I don’t want anybody to think that I’m some amazing prodigy,” he said. “I had to work quite hard to graduate early, and I think just about anybody could do it. If you take the right amount of courses and load up on classes, it’s easy.”

Dinopoulos started by taking college classes in his junior and senior years at Poland Seminary High School under a plan, established by Ohio Senate Bill 140, that allows qualified high school students to take college-level courses, tuition free. When he started as a YSU freshman he already had more than 30 credit hours, enough to qualify as a sophomore, including classes in chemistry, physics, calculus and computer science.

He discussed his plan with his YSU advisor, Robert Kramer, associate professor, Computer Science and Information Systems. “I told him I wanted to get through in two years,” Dinopoulos explained. “I just wanted to be successful, and I thought the faster I get out of college with a great education, the faster I could get into a job.”

Kramer worked with Dinopoulos to ensure that all his course requirements were met, and he recommended the Poland student when Tom Reardon, a retired teacher who works in product development with Texas Instruments, came seeking a student to work on a development project for the company. That endorsement provided Dinopoulos with a one-year internship with Texas Instruments that has evolved into an independent contract with the global company.

After graduation, Dinopoulos will relocate to the Pittsburgh area, where he starts work June 1 as a software developer for Bechtel Plant Machinery Inc. in Monroeville, Pa., a division of Bechtel Inc., the largest construction and engineering company in the United States. Bechtel recruited him after he interviewed with its representatives at a YSU Career Fair last spring.

He plans eventually to pursue a master’s or doctorate degree, but first Dinopoulos wants to start his career in computer software development. “I definitely feel ready,” he said. “I’m excited about getting to work.”