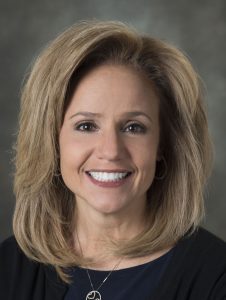 Anita A. Hackstedde of Columbiana, Ohio, president and chief executive officer of Salem Regional Medical Center, is the newest member of the YSU Board of Trustees.

Hackstedde earned a bachelor’s degree in Biology, with a minor in Chemistry, from YSU in 1990 and a medical degree from Ohio State University College of Medicine in 1994. She was director of Student Health at YSU from 1998 to 2006. She was named president/CEO of Salem Regional Medical Center in December 2013, after serving as its vice president of Medical Affairs since 2006.

Her term on the Board of Trustees will run through April 30, 2021. She is filling the unexpired term of James B. Greene of Canfield, who died in 2016.

Hackstedde joins Samuel W. Grooms, chief executive officer of Hy-Tek Material Handling Inc. in Columbus, as the newest member of the board. Grooms, who holds a bachelor’s degree in Business Administration from YSU, was appointed in May and is serving a nine-year term that ends in April 2025. He replaced Harry Meshel, whose term on the board has expired.

The governor also appointed Allan Metz as a student member of the board. His two-year term will expire in April 2018. Metz is studying Biology/Pre-Med and is a member of the YSU University Scholars Program.