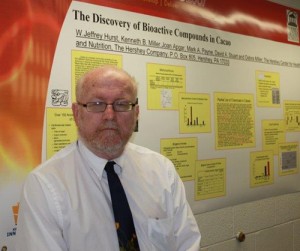 Jeffrey Hurst has spent the last 39 years of his life working for The Hershey Company and analyzing the science and history of everyone’s favorite guilty pleasure – chocolate.

“I’m the chocolate geek,” he says of the title he holds proudly as principal scientist at Hershey.

Hurst started his career at the cocoa kingpin after graduating from YSU with a master’s in chemistry in 1975. Ten years later, while working on his PhD and employed as an analytical chemist at Hershey, he got the assignment that would shape his research for the next three decades.

“We got a phone call from the University of Texas,” Hurst recalls. “A team of anthropologists there had opened a tomb in northeastern Guatemala and found vessels bearing the hieroglyph for the Mayan word kakawa and containing residue of what they thought could be cacao, the main ingredient found in chocolate.”

Known for his problem-solving skills, Hurst was assigned to determine whether the ancient residue could be some form of ancient chocolate. Using high-performance liquid chromatography – a chemical analysis technique that separates, identifies and quantifies each element in a mixture – Hurst found that the vessel residue was indeed a signature of cacao. His team would be the first to prove that ‘chocoholics’ might have existed as far back as 600 B.C.

“This was liquid chocolate used only by the elite,” Hurst explained. Cacao beans were also used as currency, he said, and later to create “the first energy bar,” a substance resembling a hockey puck that Mayan warriors took with them when exploring new territory.

Hurst would work with the University of Texas again years later to find evidence of Mesoamericans drinking a form of liquid chocolate – a discovery that received as much press and interest as his first find.

Hurst’s studies on the ancient treat led him to co-author a book, Chocolate as Medicine: A Quest over the Centuries, published in 2012. Its focus reveals applications of chocolate as medicine by Mesoamericans for alleviating fatigue, treating snakebites and even preventing heart ailments.

Hurst’s latest book, Chocolate as Health: Chemistry, Nutrition and Therapy, is a follow up to the historical account and looks at various aspects of the nutritional value of cacao. It’s his eighth book, in addition to several hundred other publications and presentations he’s made on his favorite sweet topic.

But Hurst says that all of his research on ancient chocolate is actually a sideline for him. On a day-to-day basis, as principal scientist for Hershey, he is primarily responsible for providing technical assistance to the company’s regulatory affairs group and monitoring developments in new analytical technologies used, for example, in determining food allergens – a subject that he focused on in his master’s degree studies at YSU.

In addition, Hurst is active in teaching and serves as treasurer for the International Society of Chocolate and Cocoa in Medicine. In his spare time he volunteers for two taste panels, including one for chocolate liquor that involved three years of training. He lives in Mount Gretna, Pa., with his wife Deborah. They have two daughters and a grandson.

He continues to see more opportunities ahead, but the real question is – how much of a sweet tooth does Hurst himself have for the substance that has accounted for a career of nearly 40 years?

“I enjoy chocolate,” he says, smiling, “but everything in moderation.”

Tagged with
Alumni Success, Worth A Read
September 18, 2015
A+ A-
Email Print