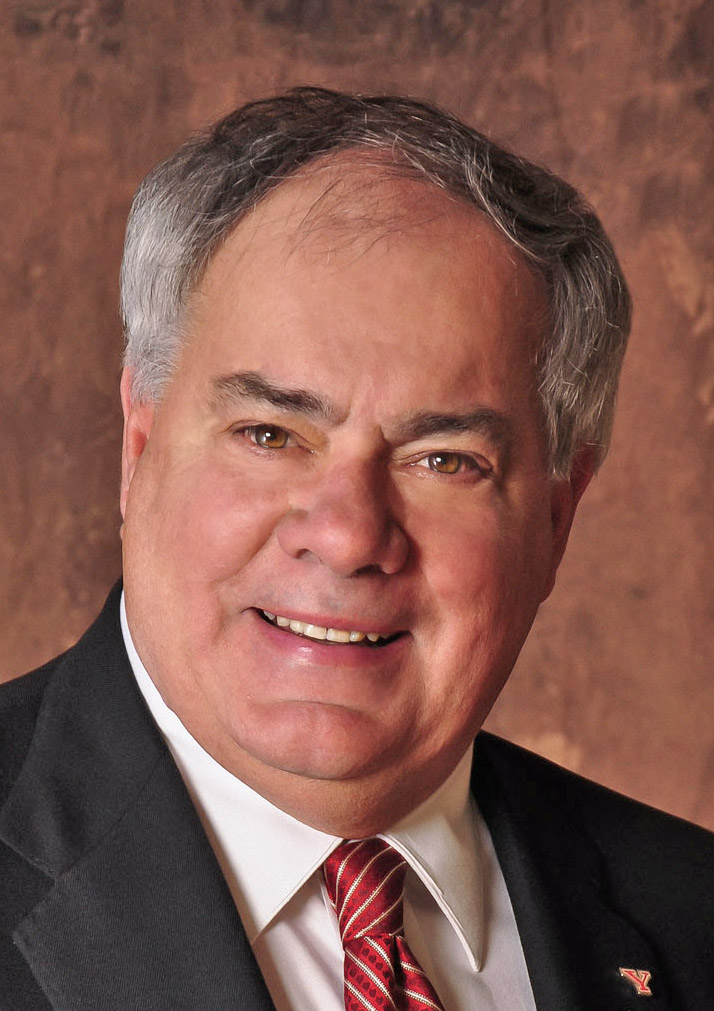 Don Constantini, a graduate of Youngstown State University and founder of Falcon Transport and Comprehensive Logistics Co. in Youngstown, is donating $1 million toward the construction of a multimedia center on the east side of YSU’s Stambaugh Stadium.

The Don Constantini Multimedia Center will house classrooms and laboratories for the YSU Department of Communication, as well as game day activities for all Stambaugh Stadium events. In addition, the center will include space for YSU’s Sports Broadcasting program and the new Constantini Classroom, which will host hundreds of students enrolled annually in mandatory introductory Communications courses.

“We want to thank Don for his ongoing generosity in support of the university and its students,” YSU President Jim Tressel said. “This gift represents a partnership between academics and athletics and, we believe, will result in improved performance both in the classroom and on the playing field.”

Constantini, who earned a bachelor’s degree in Business Administration from Youngstown University in 1966, said he is proud to call YSU his alma mater.

“Youngstown State is the gem of the entire Mahoning Valley region,” he said. “I am happy to be able to support an institution that continues to positively impact the lives of thousands of people every year.”

Rendering of the Constantini Multimedia Center at Stambaugh Stadium,

Adam Earnheardt, chair of the YSU Department of Communication, said the new multimedia center will be an invaluable resource for students in his department, particularly in the new Sports Broadcasting program.

“If you have a Sports Broadcasting program, you must have the facilities to support it, and this media center goes a long way to ensuring the strength of our program,” he said. “To be sure, this is not a Saturday-in-the-Fall-only type of space. Our department is looking at this as an academic space first, where real world learning will take place. So, we plan to use this space more than 7 or 8 times a year. In fact, you will see students in and out this new center five days a week during the regular semester.”

He added: “We bring in top notch professional faculty from around the region to teach our students. These sports broadcasting faculty have worked for networks like ESPN, Fox Sports, the Gold Channel and Sports Time Ohio. Now we’ll have a facility that matches the needs of the professionals teaching in our program.”

This is the latest is a series of gifts that Constantini has made to YSU. He also donated $150,000 to the YSU Foundation to endow a scholarship to a football student-athlete majoring in business, $150,000 toward the construction of the Andrews Student Recreation and Wellness Center, and $200,000 toward the construction of the Williamson College of Business Administration building.

In 2005, Constantini was recognized as the Outstanding Business Alumnus by the Williamson College of Business Administration, and in 2014 he was honored as YSU Penguin of the Year. He is a member of the YSU President’s Council, the YSU Foundation Board of Trustees and the Williamson College of Business Administration Advisory Council. He has maintained a loge in Stambaugh Stadium for more than 25 years. He also has served on local boards of Catholic Charities, Salvation Army, the Penguin Club and various positions in the American Trucking Association.

Constantini is the father of two sons, Mark and Brad. After graduating from Baldwin-Wallace College, both sons joined the family enterprise. He also has three grandchildren – Emma, Kate and Brad II. Don and Diana D’Alesio, his significant other of 20 years, live in Canfield and have a condo in Palm Beach, Fla.

While a student at YSU, Constantini was a member of Sigma Phi Epsilon and also was treasurer of Student Council. He was on the Honor Roll, Dean’s List, active with intramural and interfraternity sports, and received the Dean John P. Gillespie Award for having the highest grade-point average of any fraternity member.

Constantini began his business career with the Delco Remy Division of General Motors in Anderson, Ind., first as a production supervisor and then a general foreman. In 1969, he returned to Ohio and joined McNicholas Transportation as terminal manager in Columbus. He quickly advanced through the company, serving as maintenance director, vice president of sales and, in 1974, was promoted to president. When McNicholas closed in 1982, Constantini, along with two others from McNicholas, founded Compass Transportation and purchased Falcon Transport. In the 1990s, Falcon won four GM Supplier-of-the-Year awards, four Chrysler Gold Pentastar Awards and the Ford Motor Company Service Award. Midway through the decade, a sister company, Comprehensive Logistics, was started to provide logistical solutions for its customer base. In 2000, Compass was merged into Falcon and a new affiliate, Comprehensive Logistics, began to provide supply chain management to the automotive and steel industries.

Falcon Transport operates in 38 states and has nearly 1,500 employees and 900 trucks. The company has been listed in the Top 100 Truck Lines in the nation. Comprehensive Logistics employs 2,500 people and operates more than 6 million square feet of facilities in 12 locations in the United States and Canada. CLI is the just-in-time materials manager for Lordstown Assembly – handling 80 percent of total Cruze parts.