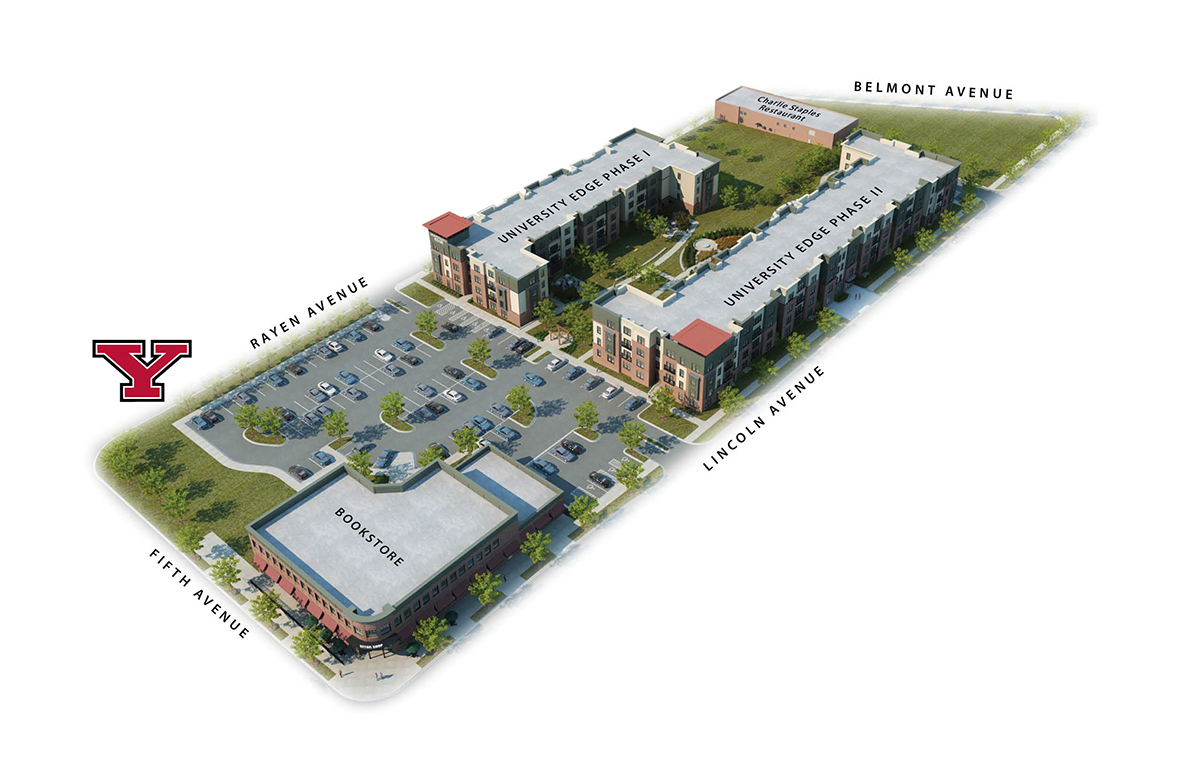 Youngstown State University officials joined representatives from Hallmark Campus Communities, Fortress Real Estate Companies and Barnes & Noble College to break ground today on the second phase of the University Edge student apartments and a new campus bookstore on the West Side of campus.

“This development along Fifth Avenue meets many of the priorities that we have set out for YSU to build and sustain growth for the years ahead,” YSU President Jim Tressel said.

“It allows us to continue to expand recruitment efforts outside the immediate region, to offer high-quality alternative housing on campus and to continue to build a full and thriving college environment and experience for our students.”

Hallmark, which has developed student housing at universities across Ohio, opened in August the four-story University Edge student apartments, a 162-bed facility along Rayen Avenue that sold out its leases months before the building was finished.

The 220-bed second phase will be constructed adjacent to phase one, along Lincoln Avenue, and is expected to be open August 2017 for the start of the 2017-18 academic year. The second phase also will include a clubhouse with a fitness center, game room, lounge area and computer lab.

“Students love the new apartments and already are clamoring for space in the second building,” said Jack Tzgournis, president of Fortress Real Estate Co., which is partnering with Hallmark on the project. “We are excited to be a part of YSU’s future.”

Hallmark is also constructing a building adjacent to the apartments that will house a new Barnes & Noble College-operated campus bookstore, which will feature a café and a convenience store. The bookstore, which will front Fifth Avenue on the same side of the street as the apartments, is expected to open during the 2017-18 academic year. It will replace the university’s current bookstore in Kilcawley Center. The future use of that space is undetermined.

“We are proud to be partnering with YSU and Hallmark,” said Chris Peterson, vice president of Stores for Barnes & Noble College. “This store represents a tremendous opportunity to increase service to students and to help ensure their success.”

Earlier this year, Barnes & Noble College, which currently manages 751 campus bookstores nationwide, took over management of the YSU campus bookstore in Kilcawley Center that was previously operated by the university.

“Having a retail business like this on a main thoroughfare of the campus, and having it operated by one of the world’s most prominent booksellers, will significantly increase the visibility and the reputation of the bookstore and the university,” said Neal McNally, YSU vice president for Finance and Business Operations.

The projects are being built by Hallmark on YSU-owned land that, with state approval, has been leased to Hallmark.

The apartments and bookstore are part of the university’s “NextYSU: A New Look for a New Era” capital improvement vision for the campus. That vision, outlined by Tressel this past spring, also calls for a new Student Success Center in Jones Hall, creation of the Mahoning Valley Innovation and Commercialization Center and construction of a wall adjacent to Kilcawley Center to honor recipients of the Heritage Award, the university’s highest honor for former employees. The plan also includes major improvements to Wick and Lincoln avenues, projects that are already underway.