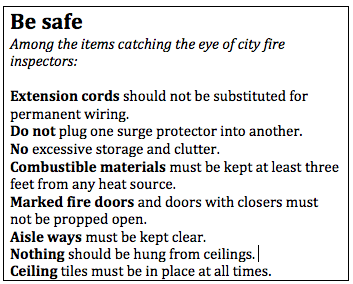 So you have that shiny new surge protector power strip in your office, but it has a ridiculously short 3-foot cord. No way the plug from the lamp on your desk is going to reach. So, you grab an extension cord from home, plug it into the power strip and plug the lamp into the other end.

Not so quick. You just violated the fire code.

It’s those kind of seemingly simple and inventive solutions that John Hyden, executive director of Facilities, wants to stop.

“People need to be more aware of compliance with fire codes in order to minimize the risk of a fire and keep everyone on campus safe,” Hyden said.

He said he and his staff are working closely with city fire inspectors to ensure that all campus facilities are free of hazards that can lead to a fire.

In the example above, for instance, it’s a violation of the fire code to plug an extension cord into a power strip. In fact, Hyden said extension cords should not be used at all on campus.

“It’s something that may seem minor, but it could actually be an accident waiting to happen,” he said. “We’re asking everyone to take a good look around their work spaces and to correct any problems.”