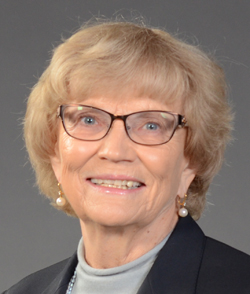 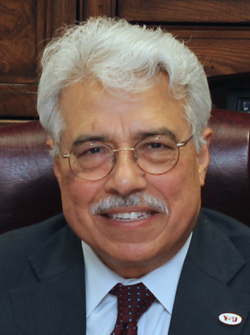 The recipients are Barbara Brothers, former chair of the English Department and dean of the College of Arts and Sciences, and Ikram Khawaja, former chair of Geological and Environmental Sciences, provost and interim university president.

The Heritage Award, started in 1981, recognizes former YSU faculty and professional/administrative staff who has made major contributions to the university during their years of service. A 16-person Heritage Award Committee comprised of representatives from each college, the administration, alumni and the YSU Retirees Association reviews nominees. Award recipients are honored with plaques mounted on the wall of the concourse of Maag Library.

Barbara (Hoover) Brothers earned a bachelor’s degree in English from Youngstown University in 1958, a master’s degree from Western Reserve University in l962 and a PhD in English from Kent State University in 1973. She taught English at Austintown Fitch High School and was an adjunct faculty member at Youngstown University from 1960-1967, serving as director of Humanities and teacher for Upward Bound in 1966 and 1967, at which time she joined the YSU faculty as an English instructor. She rose through the ranks and was promoted to full professor in 1983. From 1974 to1992, she chaired the Department of English and played a significant role in shaping many academic and outreach programs that still exist today, including Professional Writing and Editing (now Professional and Technical Writing), Peace and Conflict Studies, Women’s Studies and American Studies. In 1993, after serving as acting graduate dean, she was appointed dean of the College of Arts and Sciences. Encouraging excellence in others, Brothers set a high standard for herself as well, publishing numerous scholarly articles and a monograph, co-editing five scholarly books and two national journals, serving as the writer or co-writer of more than $3.5 million in grants, delivering numerous presentations at state, national and international scholarly conferences and reviewing manuscripts for scholarly journal and presses. She was named a Distinguished Member of the Honor Society of Phi Kappa Phi, received College English Association Professional Achievement Awards in 1999 and 2001 and a Distinguished Service Award in 1994, Kent State English Department Distinguished Alumnus Award in 1994 and YSU Arts and Sciences Distinguished Alumnus in 1991. She received the Watson Distinguished Professor Award in 1974, the YSU Distinguished Professor award three times and the Watson Distinguished Department Chair Award four times. At the state and national levels, Brothers provided leadership to the College English Association of Ohio, the Ohio Humanities Council, the national College English Association, the Association of Departments of English, the Modern Language Association, the State Library Board, and the National Endowment for the Humanities. On campus, among her many service roles were the Senate Executive Committee, Chair of Graduate Council, Chair of Academic Standards and Events and hiring committees for University President and two deans. She has also served and continues to serve the community through participation and leadership in numerous organizations, including the League of Women Voters of Greater Youngstown, YWCA Capital Campaign, Youngstown Symphony, Park Vista Board, Youngstown Chapter of AAUW and the Citizen’s League of Youngstown. She helped to endow the YSU Poetry Center through the Drs. Barbara Brothers and Gratia Murphy Fund. She is a Gould Society Member, the local YSU liberal arts honor society, to which she was elected in 1958, the year of its founding. She is the mother of two children, Mark and Jill Brothers, and two step-children, Emily Ludwig and Marla Haims Cohen. She is married to Lawrence Haims, and they have nine grandchildren. Brothers retired in 2001 and was bestowed the title Administrator Emeritus.

Ikram Khawaja taught thousands of students and worked with hundreds of colleagues on numerous projects both on and off the campus during a 40-year career at YSU. He served as faculty, department chair, director of faculty relations, dean, interim dean, interim provost, provost and interim president. He received the YSU Watson Merit Award for outstanding performance as a department chair on two occasions. He has served as advisor to student organizations with interests in Geology, Pakistan, Islam and Cricket. Khawaja holds bachelor’s and master’s degrees from the University of Karachi, Pakistan, a master’s in Geology from Southern Illinois University and a PhD in Geology from Indiana University. His research has been focused on the relationship between minerals and humanity. He has also worked on oil and gas, groundwater and geoscience education in both the United States and Pakistan. In 1976, the National Science Foundation funded Khawaja’s collaboration with Pakistani scientists on groundwater problems in Pakistan. In 1997, the United Nations sent him to Pakistan via the U.N. Token Program to help Environmental Geology programs at the University of Balochistan in Quetta and Quaid-e-Azam University in Islamabad. Between 2003 and 2005, he returned to Pakistan to help Fatima Jinnah Women University develop their environmental studies program. Khawaja was instrumental in the creation of the YSU Center for Islamic Studies and an endowed Professorship in Islamic Studies. He also led the university’s efforts in soliciting a donation of gems and minerals appraised at more than $1 million and creating the Clarence R. Smith Mineral Museum in Moser Hall. He was director of Faculty Relations from 1997 to 2000 and served as interim dean of the College of Arts and Sciences from July 2001 to July 2002 before retiring in December 2002. He returned to the university as interim dean of the College from July 2005 to July 2007. He was appointed interim provost in 2007, and named provost in 2008. In 2010, Khawaja co-chaired the committee to envision the future for YSU. The result of that committee was the document, YSU 2020: The Strategic Plan of Youngstown State University, 2011-2020. Khawaja was named the interim president, a position he held from March through June 2014, when he retired.