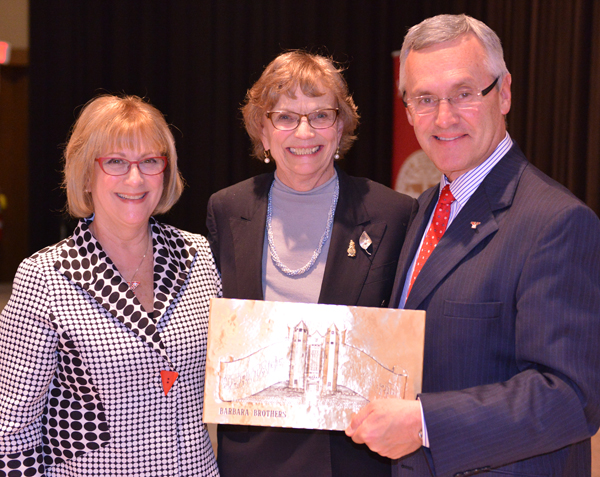 Barbara Brothers, center, receives the Heritage Award from President Jim Tressel and Carole Weimer, chair of the YSU Board of Trustees.

One is a former chair of the English department and dean of the College of Arts and Sciences whose presence is still felt in the hallways of DeBartolo Hall more than a decade after her retirement.

The other is a former chair of Geological and Environmental Sciences and university provost who retired from YSU just last year after ascending to the corner office of Tod Hall and the position of interim president.

Barbara Brothers and Ikram Khawaja received the prestigious Heritage Award at the Faculty and Staff Awards Banquet May 1 in Kilcawley Center. The award, started in 1981, is considered one of the highest honors for former YSU faculty and professional/administrative staff.

Brothers first came to YSU in the 1950s, earning a bachelor’s degree in English in 1958. After a master’s degree and PhD, Brothers joined the YSU faculty in 1967, ascending to full professor in 1983. She was chair of English for nearly 20 years, later serving as dean of the College of A&S.

Khawaja, a native of Pakistan, spent four decades at YSU, as a faculty member, department chair, director of faculty relations, dean, interim dean, interim provost, provost and interim president. He received the YSU Watson Merit Award for outstanding performance as a department chair on two occasions. He was not available to attend the awards event.