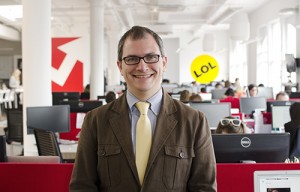 Call it the “tweet” heard ‘round the world. At 10:01 a.m. on June 26, Chris Geidner believes he was the first journalist to tweet news of the Supreme Court ruling declaring same-sex marriage a constitutional right.

One minute later, the first story on the ruling was posted online by BuzzFeed, the fast-growing Internet news outlet where he is employed as legal editor in Washington D.C.

“I was sitting in the Supreme Court press office the morning the marriage equality decision was announced,” said Geidner, a YSU alum recognized as BuzzFeed’s bona fide expert on LGBT issues. “It was an amazing privilege to be there at that moment.” Others appreciated that he was there, as well – his tweet was re-tweeted 3,000 times, and more than a half-million people read the story.

Reporting on the high court’s groundbreaking decision culminated years of covering LGBT news for Geidner, who was named Journalist of the Year in 2014 by the National Lesbian & Gay Journalists Association. Starting out as an independent blogger, he advanced to freelance writer, to reporter and editor for Metro Weekly, Washington D.C.’s leading magazine for the gay, lesbian, bisexual and transgender community, and finally, to BuzzFeed.

Geidner grew up in Austintown and was planning to go to law school when, after some time at American University in D.C., he started at YSU as a Political Science major. He remembers the mentoring he received from Poli Sci professors Paul Sracic and Bill Binning and journalism professor Dale Harrison. After completing his baccalaureate in 2001, he earned a law degree at Ohio State University, where he was editor of the OSU Law Journal, then went to work for a Columbus law firm.

At the firm, Geidner gained experience with complex constitutional litigation, so he was well prepared when he began working with Ohio Attorney General Marc Dann in 2006, and later, with acting AG Nancy Rogers.

As a law student, he started a blog called Law Dork where he often reported and editorialized on LGBT issues. He took a hiatus from blogging while working at the AG’s office but started writing again when he left public employment and made plans to move to Washington D.C. The timing was right for a young attorney/writer, well versed in the history of LGBT news, he said, and he quickly established himself as a “go-to” person on those issues.

New to D.C., Geidner was asked to freelance for Metro Weekly and was soon working full time as a political writer and editor, reporting on national issues. “The hate crimes law passed, I covered the end of ‘don’t ask, don’t tell.’ It was a great opportunity to dig in as a new journalist.”

Two years later, in 2012, BuzzFeed opened a D.C. bureau and offered Geidner a position as LGBT reporter. “Not many mainstream media publications had a person dedicated to LGBT coverage,” he said. “We were ahead of the curve.”

Since then, Geidner has crisscrossed the country for BuzzFeed, following major court cases and human-interest stories. He remembers sitting at a Panera Bread restaurant in his Ohio hometown on Christmas Eve, 2012, writing about the seven states likely to see marriage equality the following year. “Voters in three states had approved marriage equality that November, and I covered the next 41 for BuzzFeed,” he said.

He’s especially proud of an in-depth profile he did on Jim Obergefell of Cincinnati, the lead plaintiff in the Supreme Court’s landmark marriage equality case. Geidner spent a full day with Obergefell and his attorney, and his article attracted 175,000 views.

But why work for BuzzFeed instead of a more traditional news outlet? “Because I think we do it better,” Geidner said, citing the staff’s comfort with technology and change, and its expanding coverage of news worldwide. “I also like our intentional commitment to diversity, making it a core mission. It’s the moral and right thing to do,” he said. “It also allows us to generate better stories, stories that aren’t told in other newsrooms.”

Alumni Success, Uncategorized, Worth A Read
September 18, 2015
A+ A-
Email Print