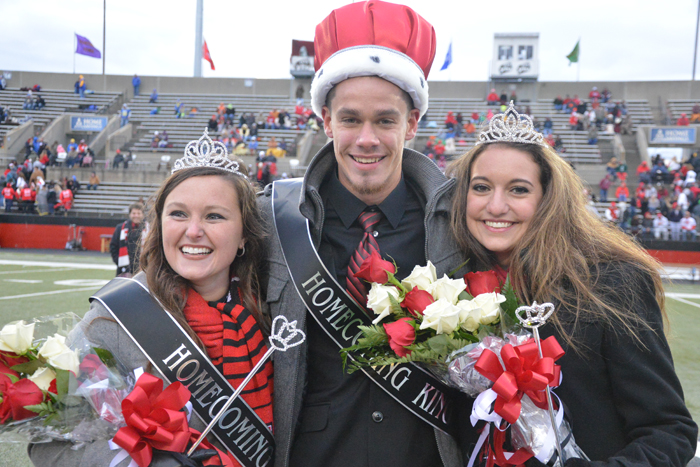 Seventy-five homecomings, and never did YSU see anything like this.

For the first time in history, YSU has co-Homecoming queens.

Due to a tie in voting, both Gianna Marinucci and Ashley Milligan were crowned queens at halftime of Homecoming earlier this fall.

Marinucci of Boardman is a senior Integrated Math Education major. She is a member of Zeta Tau Alpha Sorority, Association for Women in Mathematics and serves as the president of Panhellenic Council.  She was nominated by the Greek Campus Life and YSUscape.

Milligan, a native of Canfield, is a senior majoring in Nursing.  She is the academics chair for Alpha Omicron Pi Sorority and has been inducted into Order of Omega Greek Honor Society. She was nominated by her sorority.

This year’s Homecoming King is Austin McClean, a senior and native of West Jefferson, Ohio, who is pursuing a degree in Nursing. He is member of the YSU Men’s Cross Country and Track and Field teams and was nominated by the Student Athlete Advisory Committee.